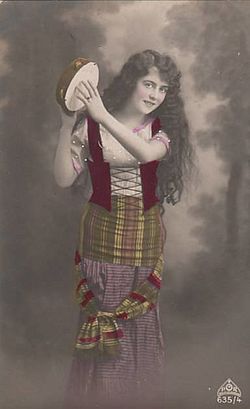 A Gypsy girl with tambourine (postcard from around 1910)

The tambourine is a well-known percussion instrument. It is often used in large orchestras but can also be used in marching bands and other music groups.

The tambourine looks like a small hand-held drum, but in addition to the skin (drumhead) which can be hit in various ways by the other hand or fingers, there are also small pairs of jingles - like tiny cymbals - which are fixed in slots around the frame. This is the usual kind used in orchestras. However, tambourines come in many shapes and forms. Some are made without a skin, particularly for use in schools. They are also found in various forms in many parts of the world. The tambourine came to Europe through the Arabs who brought it to Italy and Spain. They can be used in classical music as well as in pop music and rock music.

How to play a tambourine

The tambourine is usually held in the hand. The jingles can be made to sound by hitting the frame of the instrument with the other hand, or by shaking the instrument in various ways. Very often the player will hold the instrument high in the air. This not only looks good, but it can also be heard well. The other hand can tap rhythms on the skin which makes it sound like a drum as well as making the jingles sound. It can be hit by the knuckles, or with the finger tips, or the flat of the hand or the back of the hand. It can also be hit against the side of the leg. A good player with a good tambourine can sometimes create a nice effect with a "thumb roll". This is done by making the tip of the thumb slightly wet and then moving it fast along the edge of the skin so that the thumb bounces very fast.

It is also possible to put the instrument, with the head up, on the player's lap or on a table or chair, and play with the fingers or with drumsticks.

When a tambourine is used in an orchestra it is usually just one tambourine, although Berlioz asked for two tambourines in his overture Le carnaval romain. It is very often used in music which sounds Italian or Spanish. It nearly always makes music sound very lively, e.g. in the second movement of Prokofiev's First Violin Concerto.

All content from Kiddle encyclopedia articles (including the article images and facts) can be freely used under Attribution-ShareAlike license, unless stated otherwise. Cite this article:
Tambourine Facts for Kids. Kiddle Encyclopedia.