Diana Ross (born March 26, 1944) is an American singer and actress. Born and raised in Detroit, Michigan, she rose to fame as the lead singer of the vocal group The Supremes, who became Motown's most successful act during the 1960s and one of the world's best-selling girl groups of all time. They remain the best-charting female group in US history, with a total of twelve number-one hit singles on the US Billboard Hot 100, including, "Where Did Our Love Go", "Baby Love", "Come See About Me", and "Love Child".

Following departure from the Supremes in 1970, Ross embarked on a highly successful, globally ground-breaking solo career in music, television, film and stage. Ross' eponymous debut solo album that same year, featured the US number-one hit "Ain't No Mountain High Enough" and music anthem "Reach Out and Touch (Somebody's Hand)". It was followed with her second solo album, Everything Is Everything, which spawned her first UK number-one single "I'm Still Waiting". She continued her successful solo career by mounting elaborate record-setting world-wide concert tours, starring in a number of highly watched prime-time television specials and releasing hit albums like Touch Me in the Morning (1973), Mahogany (1975) and Diana Ross (1976) and their number-one hit singles, "Touch Me in the Morning", "Theme from Mahogany" and "Love Hangover", respectively. Ross further released numerous top-ten hits into the 1970s, 80s and 90s. She achieved two more US number-one singles, "Upside Down" (1980) and "Endless Love" (1981), as well as UK number-one hit "Chain Reaction" (1986) and UK number-two hit "When You Tell Me You Love Me" (1991). In 2019, Ross made history by charting four more number-ones on the US Billboard Dance Chart in just two years with remixes 'Ain't No Mountain High Enough 2017' in January 2018, 'I'm Coming Out/Upside Down 2018' in August that year and 'The Boss 2019' in April 2019.

Ross has also ventured into acting, with a Golden Globe Award-winning and Academy Award-nominated performance in the film Lady Sings the Blues (1972); she recorded its soundtrack, which became a number one hit on the US album chart. She also starred in two other feature films, Mahogany (1975) and The Wiz (1978), later acting in the television films Out of Darkness (1994), for which she also was nominated for a Golden Globe Award, and Double Platinum (1999).

Ross was named the "Female Entertainer of the Century" by Billboard in 1976. She is the only female artist to have number-one singles on the Billboard Hot 100 as a solo artist, as the other half of a duet, as a member of a trio, and as an ensemble member. Billboard ranked her as 28th greatest Hot 100 artist of all time. Ross ranks among the Top 5 artists on the Billboard Hot 100 singles chart from 1955 to 2018 when combining her solo and Supremes' hits. She had a top 10 UK hit in every one of the last five decades, and sang lead on a top 75 hit single at least once every year from 1964 to 1996 in the UK, a period of 33 consecutive years and a record for any performer. In 1988, Ross was inducted to the Rock and Roll Hall of Fame as a member of the Supremes. Guinness Book of World Records recognized her success in the United States and United Kingdom for having more hits than any female artist in the charts, with a career total of 70 hit singles with her work with the Supremes and as a solo artist. She was the recipient of the Kennedy Center Honors in 2007, the Grammy Lifetime Achievement Award in 2012, and the Presidential Medal of Freedom in 2016. 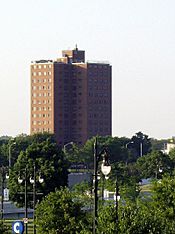 The building that was part of the Brewster-Douglass Housing Projects in Detroit, where Diana spent her teenage years 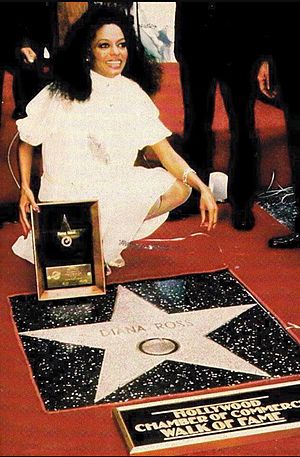 In 1982, Diana Ross received her first star on the Hollywood Walk of Fame. Apart from this star, Ross also received a second for her work with the Supremes.

Several of Ross's songs have been covered and sampled. "Ain't No Mountain High Enough" has been featured in the film Chicken Little. The song has also been covered live and on albums by Jennifer Lopez, Amy Winehouse. Janet Jackson sampled "Love Hangover" on her 1997 song "My Need" (featured on the album The Velvet Rope), having already sampled "Love Child" and "Someday We'll Be Together" by Ross & the Supremes on her 1993 tracks "You Want This" and "If" (both released as singles from the janet. album). "Love Hangover" was also sampled in Monica's 1998 number 1 "The First Night" as well as being sampled by Will Smith, Master P (who also sampled "Missing You"), Heavy D and Bone Thugs N Harmony, "It's Your Move" was sampled in 2011 by Vektroid for her song "Lisa Frank 420 / Modern Computing", which appeared in her ninth album Floral Shoppe under her one-time alias Macintosh Plus. "It's My House" was sampled by Lady Gaga for her song "Replay" which appeared on the 2020 album Chromatica.

Motown: The Musical is a Broadway musical that launched on April 14, 2013. It is the story of Berry Gordy's creation of Motown Records and his romance with Diana Ross.

Billboard magazine named Ross the "female entertainer of the century" in 1976. In October 1993, Diana Ross was inducted in the Guinness Book Of World Records, as " THE MOST SUCCESSFUL FEMALE MUSIC ARTIST IN HISTORY " due to her success in the United States and United Kingdom for having more hits than any other female artist in the charts with a career total of 70 hit singles. Ross is also one of the few recording artists to have two stars on the Hollywood Walk of Fame—one as a solo artist and the other as a member of the Supremes. After her 1983 concert in Central Park, Diana Ross Playground was named in her honor with a groundbreaking opening ceremony in 1986.

Ross was given credit for the discovery of the Jackson 5. Her "discovery" was simply part of Motown's marketing and promotions plan for the Jackson 5. Consequently, their debut album was titled Diana Ross Presents the Jackson 5. It was actually Motown producer Bobby Taylor who discovered the Jacksons. Even so, Ross embraced the role and became a good friend of Michael Jackson, serving as a mother figure to him.

In 2006, Diana was one of 25 African-American women saluted at Oprah Winfrey's Legends Ball, a three-day celebration, honoring their contributions to art, entertainment, and civil rights.

Diana Ross was named one of the Five Mighty Pop Divas of the Sixties along with Dusty Springfield, Aretha Franklin, Martha Reeves, and Dionne Warwick.

All content from Kiddle encyclopedia articles (including the article images and facts) can be freely used under Attribution-ShareAlike license, unless stated otherwise. Cite this article:
Diana Ross Facts for Kids. Kiddle Encyclopedia.