The Muppet Show facts for kids

The Muppet Show is a comedy television series created by Jim Henson and featuring the Muppets. After two pilot episodes produced in 1974 and 1975 failed to get the attention of network executives in the United States, Lew Grade approached Henson to produce the show in the United Kingdom for ATV. Five seasons, totalling 120 episodes, were broadcast on ATV and other ITV franchises in the United Kingdom from 1976 to 1981. The show was filmed at Elstree Studios, England.

The Muppet Show is presented as a variety show, featuring recurring sketches and musical numbers intertwined with plotlines taking place behind the show. Kermit the Frog is portrayed as a showrunner who tries to maintain control of the overwhelming antics of the other Muppet characters, as well as appease the rotating slate of guest stars. In addition to its guest stars, The Muppet Show is known for its uniquely designed characters, vaudevillian wit, physical slapstick, sometimes absurdist humor, and parodies. As the series' popularity rose, many celebrities were eager to perform with the Muppets on television and in film.

The cast of performers over the course of the series consisted of Henson, Frank Oz, Jerry Nelson, Richard Hunt, Dave Goelz, Steve Whitmire, Fran Brill, Eren Ozker, Louise Gold, Kathryn Mullen, Karen Prell, Brian Muehl, Bob Payne, and John Lovelady. Many of the performers also worked on Sesame Street, whose characters made sporadic appearances on The Muppet Show. Jerry Juhl and Jack Burns were two of the head writers. The music was performed by Jack Parnell and his orchestra. 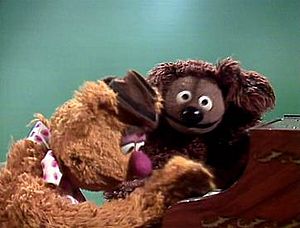 All content from Kiddle encyclopedia articles (including the article images and facts) can be freely used under Attribution-ShareAlike license, unless stated otherwise. Cite this article:
The Muppet Show Facts for Kids. Kiddle Encyclopedia.