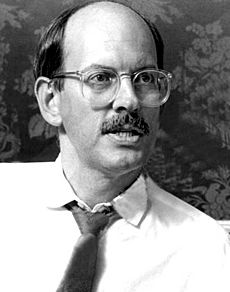 Frank Oz (born Frank Richard Oznowicz; May 25, 1944) is an American actor, puppeteer, director and producer. He began his career as a puppeteer, performing the Muppet characters of Miss Piggy, Fozzie Bear, Animal, and Sam Eagle in The Muppet Show; and Cookie Monster, Bert, and Grover in Sesame Street. He is also known for the role of Yoda in the Star Wars series, providing the voice for the character in several films and television series.

All content from Kiddle encyclopedia articles (including the article images and facts) can be freely used under Attribution-ShareAlike license, unless stated otherwise. Cite this article:
Frank Oz Facts for Kids. Kiddle Encyclopedia.