Bert and Ernie facts for kids 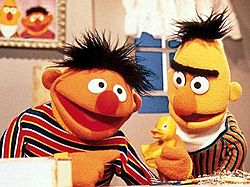 Ernie (left), with his rubber duckie, and Bert (right) on Sesame Street in 1977.

Bert and Ernie are two Muppets who appear together in numerous skits on the long-running PBS/HBO children's television show, Sesame Street. Originated by Frank Oz and Jim Henson, the characters are currently performed by puppeteers Eric Jacobson and Peter Linz; Oz performed Bert until 2006.

Bert was initially performed by Frank Oz. Since 1997, Muppeteer Eric Jacobson has been phased in as Bert's primary performer after Oz retired from most of his Muppet duties to focus on directing. Bert is a “hand rod puppet", which means that while the puppeteer's right arm is inserted into Bert's head to control the mouth, the puppeteer's left hand uses rods to control the arms of the puppet. Bert has one large eyebrow, known as a unibrow.

Ernie is a "live hand puppet", meaning that while operating the head of the puppet with his right hand, the puppeteer inserts his left hand into a T shaped sleeve, capped off with a glove that matches the fabric "skin" of the puppet, thus "becoming" the left arm of the puppet. A second puppeteer usually provides the right arm.

Ernie's performance of "Rubber Duckie," wherein he sings affectionately about his squeaking toy duck and the joy it brings him during bath time, became a modest mainstream hit, reaching No. 16 on the Billboard Hot 100 in September 1970.

All content from Kiddle encyclopedia articles (including the article images and facts) can be freely used under Attribution-ShareAlike license, unless stated otherwise. Cite this article:
Bert and Ernie Facts for Kids. Kiddle Encyclopedia.