James Maury "Jim" Henson (September 24, 1936 – May 16, 1990) was an American artist, animator, puppeteer, and moviemaker. He was best known for his work with the Muppets, which he helped to create.

Henson's best known puppet is Kermit the Frog. As a puppeteer, Henson performed in various television programs, such as Sesame Street and The Muppet Show, movies such as The Muppet Movie and The Great Muppet Caper. He also made puppets for projects like Fraggle Rock, The Dark Crystal, and Labyrinth. 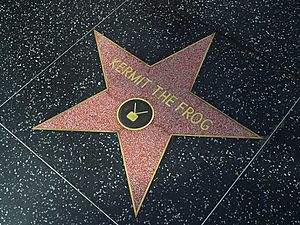 The Jim Henson Company and the Jim Henson Foundation continued after his death, making new series and specials. Jim Henson's Creature Shop, founded by Henson, also continues to build creatures for a large number of other movies and series (e.g. the science-fiction production Farscape, the movie adaptation of The Hitchhiker's Guide to the Galaxy, and the movie MirrorMask) and is said to be one of the most advanced and well respected creators of movie creatures.

His son Brian and daughter Lisa are the co-chairs and co-CEOs of the company. His daughter Cheryl is the president of the foundation. Steve Whitmire, a veteran member of the Muppet puppeteering crew, plays the roles of Kermit the Frog and Ernie, the most famous characters formerly played by Jim Henson.

One of Henson's last projects is a show attraction in Walt Disney World and Disneyland. It is called Muppet*Vision 3D. It opened in 1991, shortly after his death. 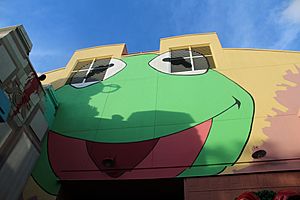 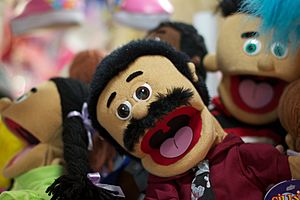 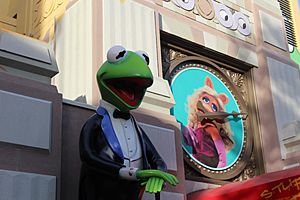 All content from Kiddle encyclopedia articles (including the article images and facts) can be freely used under Attribution-ShareAlike license, unless stated otherwise. Cite this article:
Jim Henson Facts for Kids. Kiddle Encyclopedia.