Statler and Waldorf facts for kids

Statler and Waldorf are a pair of Muppet characters known for their cantankerous opinions and shared penchant for heckling. The two elderly men first appeared in The Muppet Show in 1975, where they consistently jeered the entirety of the cast and their performances from their balcony seats.

Created by Jim Henson, the characters have been performed by numerous puppeteers, including Henson, in a variety of films and television productions within the Muppet franchise. Statler and Waldorf are named after two landmark New York City hotels, the Statler Hilton and the Waldorf-Astoria.

The characters are known for their heckling. In The Muppet Show, the two were always criticizing Fozzie Bear's humor, except for one occasion where Fozzie heckled them back. In contrast, they found themselves vastly entertaining and inevitably burst into mutual laughter at their own witticisms. It is later revealed in the A Muppet Family Christmas special that the two hecklers were friends with Fozzie's mother, Emily Bear. Despite constantly complaining about the show and how terrible some acts were, they would always be back the following week in the best seats in the house. As to why, the original version of The Muppet Show theme song had Statler admitting, "I guess we'll never know."

They also had a predisposition for breaking the fourth wall. Author Ben Underwood remarked on how the characters generally "blur the boundary between performer and audience", as they are "concurrently audience members and performers". Underwood points to a second season incident in which the characters see themselves watching the Muppets, with Statler skeptical, saying "No one would watch junk like that". 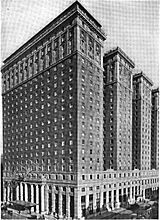 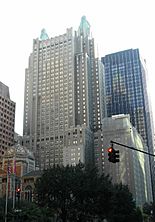 New York's Statler Hilton and Waldorf-Astoria, from which Statler and Waldorf's names are derived.

The puppets were designed by Bonnie Erickson. They were named after two historic New York City hotels, the Statler Hilton and the Waldorf-Astoria.

In the pilot episode of The Muppet Show, Statler and Waldorf were performed by Jerry Nelson and Jim Henson, respectively. Nelson was unavailable for the first few weeks of production on The Muppet Show. As a result, Richard Hunt took on the role of Statler. Hunt and Henson would continue to perform the two characters until Henson's death in 1990. To portray the characters, Hunt and Henson shared very close space, often for hours at a time.

Beginning with The Muppet Christmas Carol (1992), Statler and Waldorf were performed by Jerry Nelson and Dave Goelz, respectively. When Jerry Nelson left the Muppets, citing health reasons, Muppeteer Steve Whitmire took over as Statler. The two were occasionally performed by Drew Massey (Statler) and Victor Yerrid (Waldorf) in 2005 and 2006, most notably in the web series Statler and Waldorf: From the Balcony. Kevin Clash filled in for Goelz as Waldorf in a few episodes of Muppets Tonight.

In 2017, Whitmire departed from the Muppets franchise, including the part of Statler, after being unwillingly dismissed from the part of Kermit the Frog in October 2016. While Matt Vogel was announced for the replacement for Kermit, Peter Linz had already replaced Whitmire as the voice of Statler in advertisements.

All content from Kiddle encyclopedia articles (including the article images and facts) can be freely used under Attribution-ShareAlike license, unless stated otherwise. Cite this article:
Statler and Waldorf Facts for Kids. Kiddle Encyclopedia.