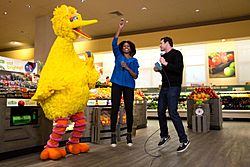 First Lady Michelle Obama participates in a "Let's Move!" Funny or Die game show taping with Billy Eichner of Billy on the Street and Big Bird at Safeway in Washington, D.C.

Big Bird is a character on the children's television show Sesame Street. Officially performed by Caroll Spinney since 1969, he is an eight-foot two-inch (249 cm) tall bright yellow anthropomorphic canary. He can roller skate, ice skate, dance, swim, sing, write poetry, draw, and even ride a unicycle. He lives in a large nest behind the 123 Sesame Street brownstone and has a teddy bear named Radar.

In 2000, Big Bird was named a Living Legend by the United States Library of Congress.

As Muppeteer Caroll Spinney has aged, the show has gradually started training new performers to play Big Bird. These apprentices include both Rick Lyon in the opening theme song of the show's 33rd season, and Matt Vogel in the show's "Journey to Ernie" segment.

Caroll Spinney was sick during the taping of a few first-season episodes, so Daniel Seagren performed Big Bird in those episodes. He also performed Big Bird when he appeared on The Ed Sullivan Show in 1969 and on Hollywood Squares in the 1970s. According to The Story of Jim Henson by Stephanie St. Pierre, the costume was built for Jim Henson to perform, but when Henson tried it on, Kermit Love, who had built the costume, did not think that Henson was walking like a bird is supposed to walk, and so Henson decided not to perform Big Bird. Frank Oz was offered the part, but since he hated performing full-body characters, he turned down the job.

Director Jon Stone, in the 1994 documentary The World of Jim Henson, revealed that the Big Bird costume actually did not have any openings that would allow the actor to see; a small television was strapped to the actor's chest to allow him to navigate. The camera was set up for Spinney by technician Walt Rauffer, on the suggestion of director Bob Myhrum. Rauffer rigged the camera to a harness strapped to Spinney's chest; Spinney reported that they called the camera "the electronic bra".

During instances where Spinney (or to a lesser extent, Matt Vogel) is performing on location and cannot get a video feed, a small hole is made in the costume to allow him to see. In such cases, Big Bird must wear a necktie to cover the hole. This can also be seen in the Sesame Street Live shows. Likewise, during instances where Big Bird and Oscar the Grouch (both performed by Spinney) are to be in a scene together, Jim Martin operates Oscar unless Matt Vogel is operating Big Bird, in which cases Oscar is performed by Spinney as usual.

As of Season 46, Spinney no longer performs in the bird suit full-time. Matt Vogel performs the bird suit on-set the majority of the time, with Spinney either looping his dialogue in-studio later or reading off the script live in-sync with Vogel's puppetry, akin to Vogel's relationship with Jerry Nelson in his final years. Spinney continues to occasionally perform in the bird suit, but these are infrequent.

Big Bird was originally designed by a drawing from Jim Henson and built by Kermit Love in 1969. The Big Bird performer is completely enclosed within the costume, and extends his right hand over his head to operate the head and neck of the puppet. The Muppeteer's left hand serves as the Bird's left wing, while the right wing is stuffed and hangs loosely from a fishing line that runs through a loop under the neck and attaches to the wrist of the left hand. The right hand thus does the opposite of the left hand: as the left hand goes down, the right hand is pulled up by the fishing line. For some of the Journey to Ernie segments, a second puppeteer (usually Jim Martin) controls Big Bird's right wing. He is concealed by dressing in a body suit the same color as their chroma key background (something that obviously cannot be done on the main Sesame Street set). Big Bird's body suit weighs ten pounds, and his head weighs four pounds. According to writer Louise Gikow, the heat inside the suit is "unbearable, and it's extraordinarily difficult to hold Big Bird's head."

Big Bird doesn't look the same in some international versions of Sesame Street. For example, in the Dutch version, Big Bird is blue and is called Pino.

Big Bird's appearance has changed over the years, as has his personality. He originally had very few feathers on top of his head; his body feathers were also more shaggy and unkempt, and his body was not as rounded and full as it is now. His personality was more dopey and "bird-brained" than it later became. He gradually got more feathers on top, giving his head a more rounded appearance, and developed a blaze-like crest of lighter yellow feathers above his eyes. His body got fluffier, rounder and more well groomed as well. His personality developed over time from being a dim, slow-witted character into the childlike innocence he is known for today. Although all the Sesame Street Muppet characters are technically ageless, Big Bird is psychologically written to represent a six-year-old.

The costume is partially assembled by company American & Fancy Feather, using the tail feathers from turkeys; as the feathers are rarely clean, company owner Anthony Trento calls the Big Bird costume his "toughest customer". Sesame Workshop is said to reject roughly 90 percent of all the feathers selected for use on the costume.

The book "G" is for Growing: Thirty Years of Research on Children and Sesame Street refers to Big Bird as a canary. In an episode of Sesame Street, Big Bird was asked if he was related to the cassowary; he replied, "I'm more of a condor." On the January 23, 1976 episode of Hollywood Squares, Big Bird was asked what kind of bird he is and said he was a lark, causing host Peter Marshall to crack up. In the film Don't Eat the Pictures, Osiris calls Big Bird an ibis. Big Bird appeared in a series 11 episode of Mister Rogers' Neighborhood, in which he declares he is a "golden condor". Zoologist Mike Dickison suggested in his popular Pechakucha talk that Big Bird represents a unique species that evolved from the whooping crane. Big Bird is always described as being flightless.

Use of Big Bird in the United States presidential election, 2012

During the first presidential debate on October 3, 2012, Mitt Romney used Big Bird as an example of spending cuts he would make to reduce the federal budget deficit. Romney told the moderator, Jim Lehrer, "I like PBS, I love Big Bird. Actually like you, too. But I'm not going to – I'm not going to keep on spending money on things to borrow money from China to pay for. That's number one."

Barack Obama’s campaign later released a satirical advertisement which described Big Bird as an "evil genius" and "a menace to our economy", and depicted Romney as more concerned with cracking down on Big Bird than on white collar criminals such as Bernie Madoff and Ken Lay.

Sesame Workshop asked that both campaigns remove Sesame Street characters from campaign materials, stating on their website: "Sesame Workshop is a nonpartisan, nonprofit organization and we do not endorse candidates or participate in political campaigns."

Big Bird did, however, appear on the October 7, 2012 episode of Saturday Night Live during the show's Weekend Update sketch. During his appearance, he made light of the situation with the segment's host, Seth Meyers, including bird-related jokes such as, when asked how he found out that his name had been mentioned in the debate, Big Bird replied, "I got a million Tweets". When asked if he had any political statement he'd like to make, Big Bird replied, "No. I don't want to 'ruffle any feathers'".

In 1985, Big Bird was the star of his own movie, Sesame Street Presents Follow That Bird, alongside the cast of Sesame Street. The plot focused on him being moved away to live with his own species by a meddling social-worker (voiced by Sally Kellerman). He is not happy with his new home and he runs away and embarks on a cross-country adventure. Along the way, he finds help from a friendly truck driver (Waylon Jennings) and two farmer kids. But on the bad side, there are two unscrupulous carnival-owning brothers (Dave Thomas and Joe Flaherty) who want to kidnap him and make him perform in their carnival for their own profit. In the meantime, his friends Bert, Ernie, Cookie Monster, Grover, Count von Count, Telly and Oscar the Grouch are in pursuit of him to find him and bring him back home safely. Also joining them are their human friends, Gordon, Maria, Olivia and Linda with Bob aiding them from Sesame Street.

In the mid-late 70s, Big Bird made several appearances on The Hollywood Squares. As with Mr. Hooper, Big Bird frequently mispronounced host Peter Marshall's name, calling him "Mr. Marshmallow" or "Mr. Masher". In another episode, when asked by Marshall what kind of bird he was, Big Bird replied "I'm a lark", which broke Marshall up.

He made an appearance as a guest star on the third season of The Muppet Show.

Big Bird also made brief appearances in The Muppet Movie and The Muppets Take Manhattan.

He appeared in A Muppet Family Christmas holiday special, in which he dissuades the Swedish Chef from cooking him for Christmas dinner by offering him a gift of homemade chocolate covered birdseed. They then sing a duet of "The Christmas Song".

All content from Kiddle encyclopedia articles (including the article images and facts) can be freely used under Attribution-ShareAlike license, unless stated otherwise. Cite this article:
Big Bird Facts for Kids. Kiddle Encyclopedia.