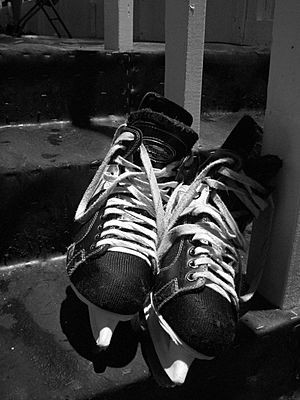 Ice skates are boots with blades attached to the bottom, used to propel the bearer across a sheet of ice while ice skating.

The first ice skates were made from leg bones of horse, ox or deer, and were attached to feet with leather straps. These skates required a pole with a sharp metal spike that was used for pushing the skater forward, unlike modern bladed skates.

Modern skates come in many different varieties, which are chosen depending on the nature of the requirements needed for the skating activity. They are worn recreationally in ice rinks or on frozen bodies of water across the globe and are used as footwear in many sports, including figure skating, ice hockey, bandy, speed skating and tour skating.

There are four main types of ice skates: 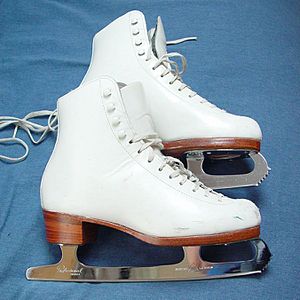 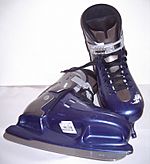 Inexpensive skates for recreational skaters usually resemble either figure skates or hockey skates, but recreational ice skates resembling inline skates with a molded plastic boot are also available. These recreational skates are the form which can be hired from ice rinks for beginners who do not own their own skates. They are often called 'death wellies' by skaters who own their own equipment because of their appearance and their reputation for giving people blisters.

The steel ice skate was invented in 1867 by John Forbes, foreman at the Starr Manufacturing Company, Dartmouth, Nova Scotia. It was a clip-on design. Their Acme brand became famous worldwide.

All content from Kiddle encyclopedia articles (including the article images and facts) can be freely used under Attribution-ShareAlike license, unless stated otherwise. Cite this article:
Ice skate Facts for Kids. Kiddle Encyclopedia.