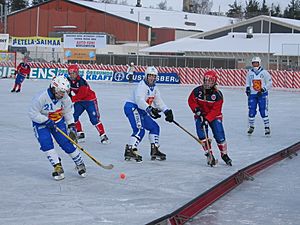 Women playing bandy for their countries, Finland and Norway

Bandy is a sport like ice hockey but with a ball instead of a puck and on a larger field. It is played on ice. The rules are much like the rules for association football.

The rules are set by the Federation of International Bandy.

There are 32 countries in the Federation of International Bandy.

Bandy World Championship for men has been played recurringly since 1957.

All content from Kiddle encyclopedia articles (including the article images and facts) can be freely used under Attribution-ShareAlike license, unless stated otherwise. Cite this article:
Bandy Facts for Kids. Kiddle Encyclopedia.