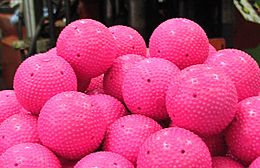 At right is displayed the color cerise. The cerise name comes from the French word meaning cherry. The word "cherry" itself comes from the Norman cherise.

According to Maerz and Paul in their Dictionary of Color, the first recorded use of cerise as a color name in English was in 1858. However, it was used at least as early as 1846 in a book of crochet patterns.

All content from Kiddle encyclopedia articles (including the article images and facts) can be freely used under Attribution-ShareAlike license, unless stated otherwise. Cite this article:
Cerise Facts for Kids. Kiddle Encyclopedia.