The making of a historic bandy ball, from the original cork on the left to the final ball painted red. To the far right is a modern bandy ball. 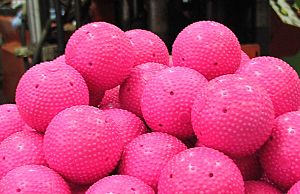 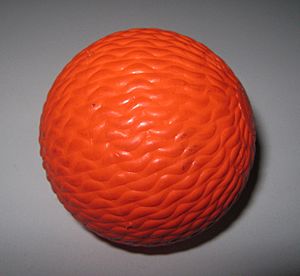 A bandy ball is a rubber ball used for playing bandy.

The core of the ball is made of cork and this is surrounded by rubber or rubber-like plastic.

The ball should be manufactured in a diameter of 62.4 mm or 63.8 mm (the latter is called "Russian ball") and the colour was originally red, later orange or cerise. According to the Bandy Playing Rules set up by the Federation of International Bandy, any of these is allowed, but all balls used in one game must be of the same colour and type.

Bandy balls are manufactured by companies such as Jofa, Kosa, and Reebok.

All content from Kiddle encyclopedia articles (including the article images and facts) can be freely used under Attribution-ShareAlike license, unless stated otherwise. Cite this article:
Bandy ball Facts for Kids. Kiddle Encyclopedia.