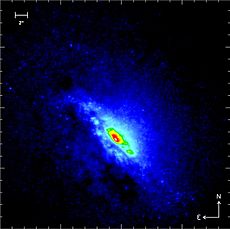 Image of galaxy NGC 4945. It shows the huge luminosity of the central star clusters, suggesting there are 10 to 100 supergiant stars in each of these, packed into regions just a few parsecs across.

Luminosity is a measure of brightness. Brightness is how much light is given off.

In astronomy, the total amount of energy emitted by a star or other astronomical object is its luminosity. It is measured in joules per second, which are equal to watts. A watt is one unit of power. Just as a light bulb is measured in watts, the Sun can also be measured in watts. The sun gives off 7026384600000000000♠3.846×1026 W. This number is known as 1 sol, the symbol for which is

If it is necessary to talk about the total power output across all wavelengths, that is called bolometric magnitude.

All content from Kiddle encyclopedia articles (including the article images and facts) can be freely used under Attribution-ShareAlike license, unless stated otherwise. Cite this article:
Luminosity Facts for Kids. Kiddle Encyclopedia.