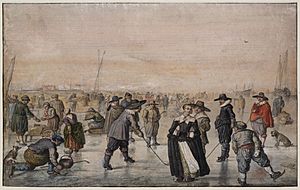 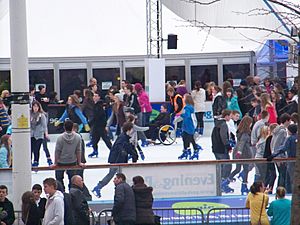 Ice skating is a type of sport. People wear special shoes to skate on ice. These special shoes are called ice skates. Ice skates have narrow pieces of metal on the bottom of the shoes. People balance on these pieces of metal. It can be done for a variety of reasons, including exercise, leisure, traveling and various sports. Ice skating occurs both on specially prepared ice surfaces (arenas, tracks, parks), both indoors and outdoors, as well as on naturally occurring bodies of frozen water, such as ponds, lakes and rivers.

Ice skating has been believed to be started in Sweden over twelve-hundred years ago by the Vikings. The runners, made of bones, were ground down until they formed a flat gliding surface, and thongs tied them to the feet. The blades were polished oxen or reindeer bones. These weren't very efficient, so they used a long stick to push themselves forward and stay unpright. Skates were originally used for transportation over the frozen rivers and later used for fun. Skating has been found to date back to 50 B.C. It was most common to skate where there are long, cold winters especially in places like Scandinavia.

In the 17th century, canal racing on wooden skates with iron blades was popular in the Netherlands. Also in that century, James, the younger son of the British monarch Charles I, came to the Netherlands in exile, he fell for the sport. When he went back to England, this "new" sport was introduced to the British aristocracy. In the 18th century, ice skating became a world known sport and the Dutch created skates with longer blades.

A number of recreational skating games are played on ice.

All content from Kiddle encyclopedia articles (including the article images and facts) can be freely used under Attribution-ShareAlike license, unless stated otherwise. Cite this article:
Ice skating Facts for Kids. Kiddle Encyclopedia.