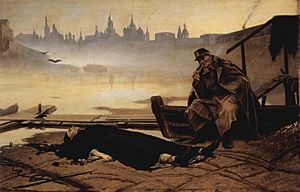 Drowning means dying from not being able to breathe in air and breathing in water or another liquid. Near drowning is the survival of drowning where the person passes out or breathes in water, and can cause serious problems, including death, after the event. That means that near drowning can also need attention by doctors.

Secondary drowning is death caused by chemical or biological changes in the lungs after a near drowning incident.

In many countries, drowning is one of the biggest causes of death for children under 14 years old. Children have drowned in wading pools and even bath tubs. Many people drown in countries where there is a lot of water, especially if they swim in dangerous waters. For example, in the United Kingdom there are about 450 drownings each year (that is: 1 per 150,000 of its people), and in the United States there are about 6,500 drownings (or around 1 per 50,000 of its people). Drowning related injuries are the fifth most likely cause of accidental death in the US. In some places, drowning is the second most likely cause of injury and death for children. Victims are more likely to be male, young or teenage. Surveys say that 10% of children under 5 have been through a situation where they could have drowned.

All content from Kiddle encyclopedia articles (including the article images and facts) can be freely used under Attribution-ShareAlike license, unless stated otherwise. Cite this article:
Drowning Facts for Kids. Kiddle Encyclopedia.