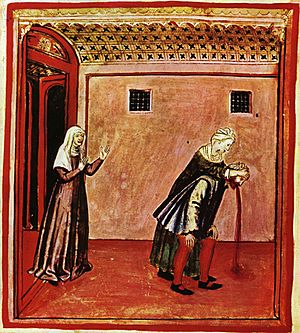 Vomiting, also called puking, is emptying the contents of stomach through mouth. It can be either food or liquid in the stomach. It can be from infection, contaminated food or drink (food poisoning), foul smells or foul-tasting food, the brain being injured, a block in the small intestines so food and liquid cannot go through, too much alcohol or other drugs. Also, people can make themselves vomit (self-induced) which is called purging. Usually people who have eaten or drunk poison are made to vomit any residual (leftover) poison off. Excessive vomiting may lead to dehydration, which can be dangerous, if not fatal as it will shut down a person's organs and twist the intestines.

All content from Kiddle encyclopedia articles (including the article images and facts) can be freely used under Attribution-ShareAlike license, unless stated otherwise. Cite this article:
Vomit Facts for Kids. Kiddle Encyclopedia.