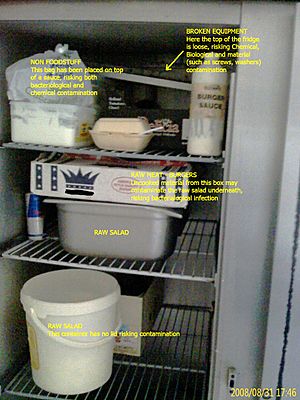 People can be sick from eating poorly stored food, as in this picture

Food poisoning is when someone gets sick from eating food or drink that has gone bad or is contaminated. There are two kinds of food poisoning: poisoning by toxic agent or by infectious agent. Food infection is when the food contains bacteria or other microbes which infect the body after it is eaten. Food intoxication is when the food contains toxins, including bacterially produced exotoxins, which can happen even when the microbe that produced the toxin is no longer present or able to cause infection. Even though it is commonly called "food poisoning", most cases are caused by a variety of pathogenic bacteria, viruses, prions or parasites that contaminate food, rather than chemical or natural toxins which are what we usually call poison. According to the Centers for Disease Control and Prevention, about 76 million people in the United States become ill from the food they eat, and about 5,000 of them die every year. 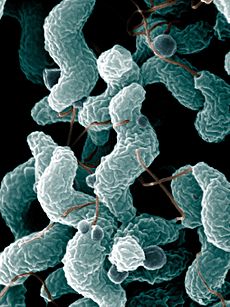 Campylobacter, a bacteria that is a major cause of food poisoning.

Symptoms start within hours to many days after eating. Depending on what the cause of the poisoning was, they can include one or more of the following: nausea, abdominal pain, vomiting, diarrhea, gastroenteritis, fever, pain in the head or fatigue.

In most cases the body is able to permanently get better after a short period of acute discomfort and illness. Food borne illnesses can result in permanent health problems or even death, especially for people at high risk, including babies, young children, pregnant women (and their fetuses), elderly people, sick people and others with weak immune systems.

Food borne illness due to Campylobacter, Yersinia, Salmonella or Shigella infection is a major cause of reactive arthritis, which typically occurs 1–3 weeks after diarrheal illness. Similarly, people with liver disease are especially susceptible to infections from Vibrio vulnificus, which can be found in oysters or crabs.

Tetrodotoxin poisoning from reef fish and other animals shows up very quickly in symptoms such as numbness and shortness of breath, and is often fatal.

All content from Kiddle encyclopedia articles (including the article images and facts) can be freely used under Attribution-ShareAlike license, unless stated otherwise. Cite this article:
Food poisoning Facts for Kids. Kiddle Encyclopedia.