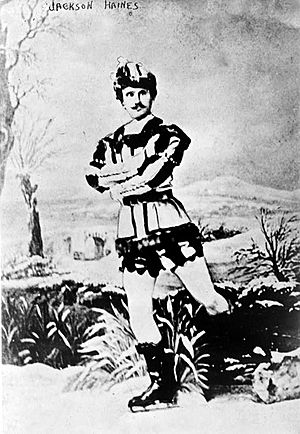 Jackson Haines (1840–1875) was an American ballet dancer and figure skater who is regarded as the father of modern figure skating.

Born in New York City, Haines claimed to be national champion in 1864. Many championships were held during those years, and none was sanctioned by a unifying figure skating organization. (The United States Figure Skating Association was not established until 1921.)

At this time, figure skating was performed in the "English style", which was rigid and formal,unlike what is performed today. Haines's style was in complete contrast; he used his ballet background to create graceful programs, and introduced accompanying music, an innovation. He also screwed his figure skates directly onto his boots, which added stability and allowed him to do more athletic leaps and jumps. The common practice of the time was to strap the blades onto the boot, but skates based on the designs (to screw the skates to the heels) of the accomplished skater and author, "Captain" Robert Jones had been manufactured in London as early as 1772.

Haines's style was not well received in the United States. He went to Europe to display and teach it, which became known as the "International style". He lived in Vienna for a time, where his skating became popular.

Haines died of tuberculosis and pneumonia in Gamlakarleby (nowadays in Finnish: Kokkola, in Swedish: Karleby), Finland in 1875.

Haines was the inventor of the sit spin, one of the three basic spin types. The other two are the upright spin, about as old as the art of ice skating itself; and the camel spin, invented during the twentieth century by Cecilia Colledge. His style did not become popular in the United States until many years after his death. The first American figure skating championships in the "International Style" were held on March 20, 1914, in New Haven, Connecticut.

All content from Kiddle encyclopedia articles (including the article images and facts) can be freely used under Attribution-ShareAlike license, unless stated otherwise. Cite this article:
Jackson Haines Facts for Kids. Kiddle Encyclopedia.