Larks are passerine birds of the family Alaudidae. All species occur in the Old World, and in northern and eastern Australia. Only one, the Shore lark, has spread to North America, where it is called the Horned lark. Habitats vary widely, but many species live in dry regions. 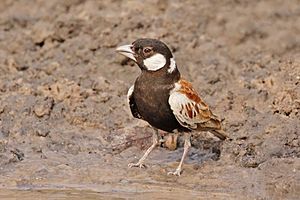 Like many ground birds, most lark species have long hind claws, which are thought to provide stability while standing. Most have streaked brown plumage, some boldly marked with black or white. Their dull appearance camouflages them on the ground, especially when on the nest. They feed on insects and seeds; though adults of most species eat seeds primarily, all species feed their young insects for at least the first week after hatching. Many species dig with their bills to uncover food. Some larks have heavy bills (reaching an extreme in the thick-billed lark) for cracking seeds open, while others have long, down-curved bills, which are especially suitable for digging.

Larks have more elaborate calls than most birds, and often extravagant songs given in display flight. These melodious sounds (to human ears), combined with a willingness to expand into anthropogenic habitats — as long as these are not too intensively managed — have ensured larks a prominent place in literature and music, especially the Eurasian skylark in northern Europe and the crested lark and calandra lark in southern Europe.

With these song flights, males defend their breeding territories and attract mates. Most species build nests on the ground, usually cups of dead grass, but in some species the nests are more complicated and partly domed. A few desert species nest very low in bushes, perhaps so circulating air can cool the nest. Larks' eggs are usually speckled, and clutch sizes range from two (especially in species of the driest deserts) to six (in species of temperate regions). Larks incubate for 11 to 16 days.

Larks, commonly consumed with bones intact, have historically been considered wholesome, delicate, and light game. They can be used in a number of dishes; for example, they can be stewed, broiled, or used as filling in a meat pie. Lark's tongues were particularly highly valued. In modern times, shrinking habitats made lark meat rare and hard to come by, though it can still be found in restaurants in Italy and elsewhere in southern Europe.

All content from Kiddle encyclopedia articles (including the article images and facts) can be freely used under Attribution-ShareAlike license, unless stated otherwise. Cite this article:
Lark Facts for Kids. Kiddle Encyclopedia.