Condor is the common name for two species of New World vultures, each in a monotypic genus. The name derives from the Quechua kuntur. They are the largest flying land birds in the Western Hemisphere.

Condors are part of the family Cathartidae, whereas the 15 species of Old World vultures are in the family Accipitridae, that also includes hawks, eagles, and kites. The New World and Old World vultures evolved from different ancestors. However, they both are carrion-eaters and have distinctive bare heads.

Both condors are very large broad-winged soaring birds, the Andean condor being 5 cm shorter (beak to tail) on average than the northern species, but larger in wingspan. California condors are the largest flying land birds in North America. The Andean condor is second only to the wandering albatross (up to 3.5 m) in terms of wingspan among all living flying birds.

The adult plumage is uniformly black, with the exception of a frill of white feathers nearly surrounding the base of the neck which are meticulously kept clean by the bird. As an adaptation for hygiene, the condor's head and neck have few feathers, which exposes the skin to the sterilizing effects of dehydration and solar ultraviolet light at high altitudes. The head is much flattened above. In the male it is crowned with a caruncle or comb, while the skin of the neck in the male lies in folds, forming a wattle. The skin of the head and neck is capable of flushing noticeably in response to emotional state, which serves to communicate between individuals. 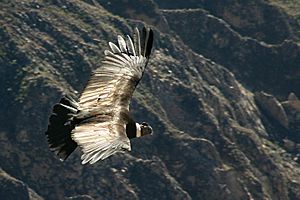 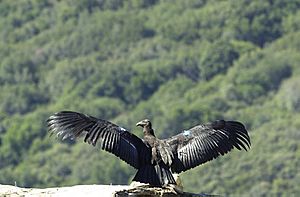 The middle toe is greatly elongated, while the talons of all the toes are comparatively straight and blunt. The feet are thus more adapted to walking as in their relatives the storks and of little use as weapons. The female, contrary to the usual rule among birds of prey, is smaller than the male.

California condors' wingspan measures up to 2.9 m (9.5 ft), and they can weigh up to 10.4 kg (23 lb). The skin on the necks will vary in color, depending on the age of the birds. Adult birds' skin color can range from cream, pink, yellow, or even orange during breeding season.

Fossils from the Pleistocene era have been found in various parts of North America, including New York and Florida, leading scientists to believe that California condors or their ancestors once lived on the west coast of North America as well as all the way to the eastern coast. Some scientists also believe that an ancient relative of the condor, Argentavis magnificens from South America, may have been the largest flying bird ever with a wingspan of 7 metres (23 ft).

Maturity and breeding behavior do not appear in the condor until 5 or 6 years of age. They may live for 50 years or more, and mate for life. The world's oldest condor died at 100 in the Jardin d'Essai du Hamma in Algiers.

The young are covered with a grayish down until they are almost as large as their parents. They are able to fly after six months, but continue to roost and hunt with their parents until age two, when they are displaced by a new clutch. There is a well-developed social structure within large groups of condors, with competition to determine a 'pecking order' by body language, competitive play behavior, and a wide variety of vocalizations, even though the condor has no voice box.

On the wing the movements of the condor are graceful. The lack of a large sternum to anchor correspondingly large flight muscles identifies it physiologically as a primary soarer. The birds flap their wings on rising from the ground, but after attaining a moderate elevation they seem to sail on the air.

Wild condors inhabit large territories, often traveling 250 km (160 mi) a day in search of carrion. They prefer large carcasses such as deer or cattle which they spot by looking for other scavengers, which cannot rip through the tougher hides of these larger animals with the efficiency of the larger condor. In the wild they are intermittent eaters, often going for a few days without eating, then gorging themselves on several kilograms at once, sometimes to the point of being unable to lift off the ground.

The Moche people of ancient Peru worshiped nature. They placed emphasis on animals and often depicted condors in their art.

All content from Kiddle encyclopedia articles (including the article images and facts) can be freely used under Attribution-ShareAlike license, unless stated otherwise. Cite this article:
Condor Facts for Kids. Kiddle Encyclopedia.