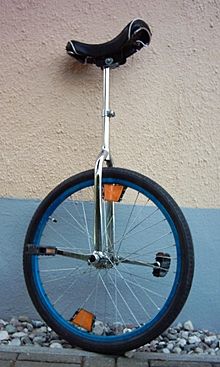 An example of a traditional unicycle. 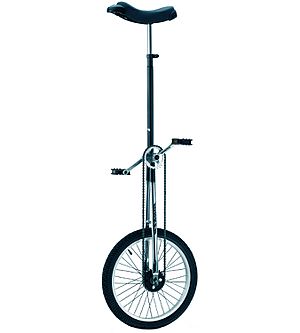 An example of a giraffe unicycle.

A unicycle (or simply cycle) is a pedal vehicle. It is like a bicycle, but it has only one wheel. It has a seat and pedals, but no chain or gears. There is no handlebar, it is steered by gripping the seat with the legs and twisting the body. A rider keeps their balance by moving their arms, and controlling their speed. It is usually used for acting and performing. A unicycle is more expensive than a cheap bicycle, because unicycles are far less common.

Unicycles are often used while the performer is simultaneously juggling or plate spinning. To do this, performers usually rock back and forth on the unicycle. This is called "idling". It lets the performer pay attention to what they are doing in their hands, instead of to the ground in front of them. To "idle" a unicycle, performers usually press one foot down, anchoring it in the bottom position of the wheel. This foot both provides support and completes the rocking motion that is necessary to keep the unicycle balanced.

Many other tricks can be done when riding a unicycle. This includes going backwards, riding up and down steps, pedaling with only one foot, hopping in place, wheel-walking (putting the feet on the tire instead of on the pedals) and riding over obstacles.

All content from Kiddle encyclopedia articles (including the article images and facts) can be freely used under Attribution-ShareAlike license, unless stated otherwise. Cite this article:
Unicycle Facts for Kids. Kiddle Encyclopedia.