Leland is a city in Washington County, Mississippi, in the Mississippi Delta. The population was 4,790 at the 2008 census. It was long a center of cotton culture, which is still an important commodity crop in the rural area.

The town is located in the heart of the Mississippi Delta on the banks of Deer Creek, which is decorated each Christmas season with floats that attract visitors from afar to view the colorful displays. Farming is the basis of the local economy, as it was since before the Civil War. Mississippi State University and the federal government maintain an agriculture research station at Stoneville on Leland's outskirts. Cotton, soybeans, rice and corn are the leading commodity crops.

Leland is in the heart of blues country and has produced a number of national and regionally famous blues musicians. There are five Mississippi Blues Trail markers in Leland commemorating the small town's significant contribution to blues history. Highway 61, mentioned in numerous blues recordings, runs through the town and gives its name to the community's blues museum. Leland is the burial place of the folk artist and blues musician James "Son" Thomas, who lived for many years near the railroad tracks. Thomas is buried beneath a gravestone donated by musician John Fogerty of Creedence Clearwater Revival.

Blues musician Johnny Winter spent part of his childhood in Leland. Winter’s grandfather and father, a former mayor of Leland, operated J.D. Winter & Sons, a cotton business. One of the Blues Trail markers in Leland is dedicated to Winter.

The community is the childhood home of puppeteer Jim Henson, who was born in nearby Greenville, but raised in Leland. Here he created the character of Kermit the Frog, a Muppet. The city has a museum along the banks of Deer Creek celebrating Henson's accomplishments. 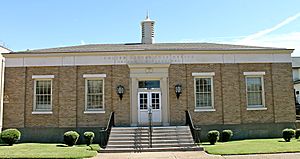 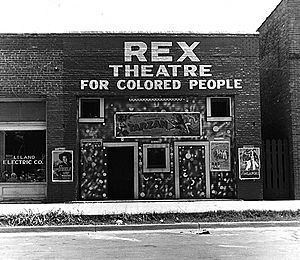 Rex Theatre for Colored People in Leland, 1937, by Dorothea Lange

Leland was selected as the site for the Mississippi Wildlife Heritage Museum, scheduled to open in 2016.

There were 1,943 households out of which 36.9% had children under the age of 18 living with them, 38.9% were married couples living together, 27.7% had a female householder with no husband present, and 27.2% were non-families. 24.2% of all households were made up of individuals and 11.1% had someone living alone who was 65 years of age or older. The average household size was 2.82 and the average family size was 3.35.

All content from Kiddle encyclopedia articles (including the article images and facts) can be freely used under Attribution-ShareAlike license, unless stated otherwise. Cite this article:
Leland, Mississippi Facts for Kids. Kiddle Encyclopedia.