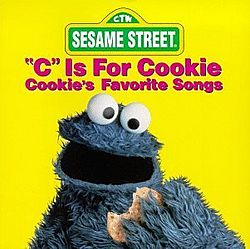 "C Is For Cookie", by Joe Raposo, is a song performed by Cookie Monster (Frank Oz), a Muppet character from the preschool television series Sesame Street. It was first performed in Season 3, although it had been released on The Muppet Alphabet Album. Along with Kermit's "Bein' Green" and Ernie's "Rubber Duckie", it is one of the show's most recognizable songs. The original version was made in 1971 and was one of the few Sesame Street sketches directed by Jim Henson.

All content from Kiddle encyclopedia articles (including the article images and facts) can be freely used under Attribution-ShareAlike license, unless stated otherwise. Cite this article:
C Is For Cookie Facts for Kids. Kiddle Encyclopedia.