Hereford is a cathedral city and is the county town; with a population of approximately 55,800 inhabitants it is also the largest settlement. The county is one of the most rural and sparsely populated in England, with a population density of 82/km² (212/sq mi). The land use is predominantly agricultural and the county is well known for its fruit and cider production, and the Hereford cattle breed.

From 1974 to 1998, Herefordshire was part of the former non-metropolitan county of Hereford and Worcester.

Herefordshire was reconstituted both as a new district (effective 19 July 1996) and as a new county (coextensive with the area of the aforementioned district) (effective 1 April 1998) by Statutory Instrument as defined in The Hereford and Worcester (Structural, Boundary and Electoral Changes) Order 1996. This Order established Herefordshire as a unitary authority on 1 April 1998, combining county and district functions into a single council. Herefordshire is also commonly called a unitary district, but this is not official nomenclature. Herefordshire is officially known as a unitary authority for local government purposes. It is governed by Herefordshire Council which was created in 1998 with the new unitary district that absorbed the previous administrative areas of Leominster District Council, South Herefordshire District Council, Hereford City Council, parts of Hereford-Worcester County Council, and parts of Malvern Hills District Council.

The Lieutenancies Act 1997 made Herefordshire a ceremonial county, covering the exact area of the unitary district. For Eurostat purposes it is a NUTS 3 region (code UKG11) and is one of three counties that comprise the "Herefordshire, Worcestershire and Warwickshire" NUTS 2 region. 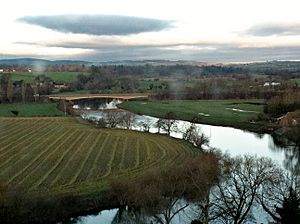 The River Wye near Ross-on-Wye.

The River Wye, which at 135 miles (217 km) is the fifth-longest in the United Kingdom, enters the county after briefly being its border with Powys. It flows through both Hereford and Ross-on-Wye before returning to Wales. Leominster is situated on the River Lugg, a tributary of the Wye.

There are two Areas of Outstanding Natural Beauty in the county. The Wye Valley is located in the river's valleys south of Hereford, while the Malvern Hills are in the east of the county, along its border with Worcestershire.

Herefordshire is one of the 39 historic counties of England.

The current ceremonial county and unitary district have broadly the same borders as the pre-1974 historic county.

See also: List of settlements in Herefordshire by population

Herefordshire's growth rate has in recent decades been higher than the national average, with the population increasing by 14.4% between 1991 and 2011 – the population of England as a whole increased by only 10.0%. However this has been from a lower base, with only Northumberland and Cumbria having lower population densities than Herefordshire.

Gypsies and Travellers have historically been Herefordshire's largest minority ethnic group. They are made up of three main groups:

Romany Gypsies and Irish Travellers fall within the definition of a minority ethnic group under the Race Relations Amendment Act (2000). They have contributed to the development of the county, for example through seasonal working in orchards. 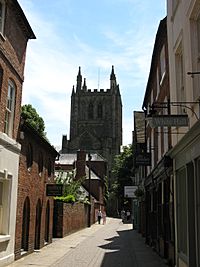 The major settlements in the county include Hereford, which is the county town and Herefordshire's only city, as well as the towns of Leominster, Ledbury, Ross-on-Wye, Kington and Bromyard.

The agricultural economy has changed massively in recent years within the county. The county is on the western edge of England which has been historically pastoral as opposed to the east which was more arable.

Hereford cattle, such as this bull, originated in the county and are now bred throughout the world.

Probably Hereford's most famous export is its Hereford beef cattle. Herefords are docile but extremely hardy creatures and these attributes have led to their proliferation across the world, particularly the USA, South America and Australia. The breed is so gentle that a Hereford bull has been used as the mascot for Hereford United Football Club for many years, led around the club's Edgar Street ground before major matches.

The county is famous for its apple and pear orchards, and its cider. There are many orchards around the county but not as many as there once were.

In the last few years, soft fruits such as strawberries have become a new and rapidly expanding area of the agricultural economy of the county. One of the main reasons for this was the introduction of the polytunnel or French tunnel. This allows the strawberries to be grown for a far longer season and with a higher quality (with no blemishes from the rain). The strawberries are mainly picked by Eastern European workers who come over for the season and often earn more money, more than they could working in their own country and with the bonus, for many of them, of learning or improving their English. The polytunnels have been a major issue in the county, as some people see them as a "blot on the landscape".

Although some polytunnel sites are illegal, Herefordshire Council has turned a blind eye in the belief that agriculture must be allowed to innovate; otherwise it will stagnate and the county will suffer.

Previously, most farms in the county had dairy cattle. Due to the cost of investing in new equipment, long hours, BSE, foot-and-mouth disease and mainly falling milk prices, the county's milk production has drastically reduced, with only a few farms still in dairy farming.

As mentioned above, the county is historically pastoral. The soils are mostly clay, meaning that large scale potato production was very difficult, as tractors were not powerful enough to pull the large machinery required to harvest the crop. Around the early 1990s new technology and more powerful machines overcame this problem. Potato production started to increase, fuelled by a few other key factors: The previously pastoral soils had not had potatoes grown in them; consequently they were not infected with eelworm (Heterodera rostochiensis and Heterodera pallida), which in the east of England had to be sprayed against weekly (a large cost). Also, the clay soil produced an unblemished potato of the highest grade. The intensive nature of the crop meant that potatoes could be grown viably on a given field in only one of every five years. Because potato growers always needed more land than they owned, they rented extra. This demand for rental fields came at a time when the rest of the industry was struggling and in serious decline. The potato farmers' rents of £300–500 per acre (as opposed to normally £80 per acre) were very helpful to many farmers in a difficult period.

Herefordshire County Council was granted a coat of arms on 28 February 1946. The arms became obsolete in 1974 on the abolition of the council, but were transferred to the present Herefordshire Council by Order in Council in 1997.

The arms are blazoned as follows:

Gules on a fesse wavy between in chief a lion passant guardant argent and in base a Herefordshire bull's head caboshed proper, a bar wavy azure; and for a Crest on a wreath of the colours a demi lion rampant gules holding in the sinister claw a fleece or; and for Supporters, on the dexter side a lion guardant or gorged with a wreath of hops fructed proper and on the sinister a talbot argent gorged with a collar or charged with three apples proper.

The red colouring ("gules") of the shield is taken from the arms of the City of Hereford. The red colour also represents the red earth of Herefordshire. The silver and blue wave across the centre of the shield represents the River Wye. The lions that form parts of the arms, crest and supporters are also taken from Hereford's arms. The agricultural produce of Herefordshire is represented by the bull's head, fleece, hops and apples. The talbot dog comes from the heraldry of the Talbot family, Marcher Lords of Shrewsbury and also from that of Viscount Hereford.

The Latin motto is: Pulchra terra Dei donum ("This fair land is the gift of God").

As part of a competition organised by the charity Plantlife to raise awareness of conservation issues, the public were asked to vote for "county flowers" that they felt best represented their county. Mistletoe was announced as the winning choice for Herefordshire in 2004. The emblem has no official status, and has not been widely adopted. Herefordshire Council uses a logo consisting of a green apple. 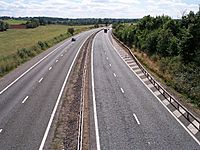 The M50 motorway near Ledbury and Ross-on-Wye.

The M50, one of the first motorways to be built in the UK, runs through the south of the county and, with the A40 dual carriageway, forms part of the major route linking South Wales with Gloucester, Oxford and London. The A49 runs north–south through the county and is a strategic route between North and South Wales as well as catering for local traffic.

The Welsh Marches Railway Line also runs north–south with passenger trains operated by Arriva Trains Wales offering links to Manchester as well as to North and South Wales. Hereford is the western end of the Cotswold Line which runs via Worcester with through services to Oxford and London Paddington (operated by First Great Western) and to Birmingham (operated by London Midland). The rural Heart of Wales Line linking Craven Arms in Shropshire to Llanelli in southwest Wales passes through the extreme north west of Herefordshire with stations at Knighton and Bucknell near the meeting point of the boundaries of Herefordshire, Shropshire and Powys. The majority of passengers between North and South Wales use the Marches line.

There has long been talk of a new station at Rotherwas, in the south of Hereford. 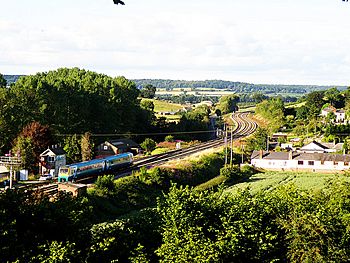 There are no airports with scheduled air services in Herefordshire. Birmingham, Cardiff both have railway stations and Bristol (which involves bus travel from Bristol Temple Meads as well as a change of train in Newport) international airports are the nearest. The RailAir coach operated by First Great Western provides connections to London Heathrow via Reading station or passengers can change at Reading station and then go all the way by train via Hayes & Harlington to Heathrow Airport. Shobdon Aerodrome near Leominster is a centre for general aviation and gliding. Hot air ballooning is also popular with Eastnor Castle being one of the favourite launch sites in the area.

Historically, the rivers Wye, Teme and Lugg were navigable but the wide seasonal variations in water levels mean that few craft larger than canoes and coracles are now used. There are canoe centres at The Boat House, Glasbury-on-Wye (in Powys, Wales), the Hereford Youth Service and Kerne Bridge in Ross-on-Wye, as well as rowing clubs in Hereford and Ross-on-Wye.

The early 19th century saw the construction of two canals, The Herefordshire and Gloucestershire Canal and The Leominster & Stourport Canal but these were never successful and there are now few remains to be seen. The Herefordshire and Gloucestershire Canal is currently the subject a restoration project, which includes the construction of a new canal basin in Hereford city centre as part of the regeneration of the Edgar Street Grid. The project, however, is being undertaken by a small voluntary group and there is no expected date for any part of the canal to re-open for boating.

All content from Kiddle encyclopedia articles (including the article images and facts) can be freely used under Attribution-ShareAlike license, unless stated otherwise. Cite this article:
Herefordshire Facts for Kids. Kiddle Encyclopedia.