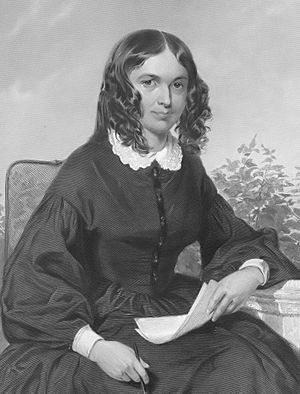 Elizabeth Barrett Browning, born on 6 March 1806, was an English poet of the Victorian era. She began writing poetry at the age of six. She was born in Kelloe, County Durham. Her parents were Edward Barrett Moulton Barrett and Mary Graham Clarke.

Her first adult collection of poems was published in 1838 and she wrote prolifically between 1841 and 1844. Elizabeth's volume Poems of Sonnets (1844) brought her great success, attracting the admiration of the writer Robert Browning, which led to their marriage. She also made efforts to abolish slavery and child labour.

She died on 29 June 1861 in Florence, Italy (where she was living with her husband) at the age of 55. She suffered from many illnesses from the age of 15.

All content from Kiddle encyclopedia articles (including the article images and facts) can be freely used under Attribution-ShareAlike license, unless stated otherwise. Cite this article:
Elizabeth Barrett Browning Facts for Kids. Kiddle Encyclopedia.