Sidmouth is a town on the English Channel in Devon, South West England, 14 miles (23 km) southeast of Exeter. With a population of 12,569 in 2011, it is a tourist resort and a gateway to the Jurassic Coast World Heritage Site. A large part of the town has been designated a conservation area. 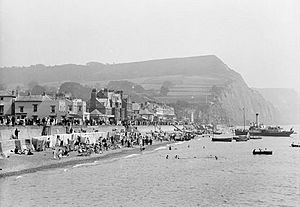 Sidmouth appeared in the Domesday Book as Sedemuda, meaning "mouth of the Sid". Like many such settlements, it was originally a fishing village. Although attempts have been made to construct a harbour, none has succeeded. A lack of shelter in the bay prevented growth as a port.

Sidmouth remained a village until the fashion for coastal resorts grew in the Georgian and Victorian periods of the 18th and 19th centuries. A number of Georgian and Regency buildings still remain. In 1819, George III's son Edward, Duke of Kent, his wife, and baby daughter (the future Queen Victoria) came to stay at Woolbrook Glen for a few weeks. In less than a month he had died from an illness. The house later became the Royal Glen Hotel; a plaque on an exterior wall records the visit. In 1874, Sidmouth was connected to the railway network by a branch line from Sidmouth Junction, which called at Ottery St Mary and Tipton St John. This was dismantled in 1967 as a result of the Beeching Axe.

In 2008, Canadian millionaire, Keith Owen, who had been on holiday in the town and planned to retire there, bequeathed the community's civic society, the Sid Vale Association, about £2.3 million upon learning that he had only weeks to live due to lung cancer. The bequest was used as a capital fund to generate an annual interest dividend of around £120,000 for community projects. 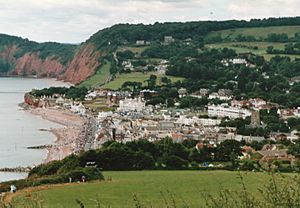 Sidmouth lies at the mouth of the River Sid in a valley between Peak Hill to the west and Salcombe Hill to the east. It is surrounded by the East Devon Area of Outstanding Natural Beauty and is on the Jurassic Coast, a World Heritage Site and the South West Coast Path. The red-coloured rock indicates the arid conditions of the Triassic geological period.

Erosion remains a serious concern east of the mouth of the Sid. The cliffs have been heavily eroded, threatening homes and the coastal footpath.

The wide esplanade has been a prominent feature since Regency times. A series of southwesterly storms in the early 1990s washed away much of the shingle beach protecting the masonry. A series of artificial rock islands was constructed to protect the sea front, and tons of pebbles were trucked in to replace the beach.

Sidmouth is only 12 miles from the M5 at Exeter from Junction 30, Sidmouth is then accessed by the coast road A3052. A regular bus service is run to the town from Exeter up to every half-hour by Stagecoach, the bus then carries on to Honiton or Seaton on an hourly basis. Nearest railway stations are Feniton, Honiton, Exeter or Exmouth; regular bus services are available from each station. 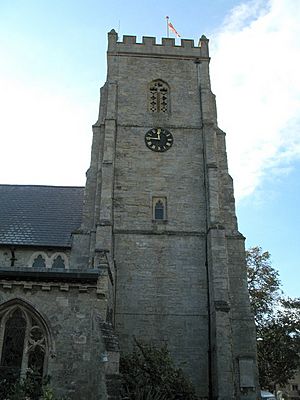 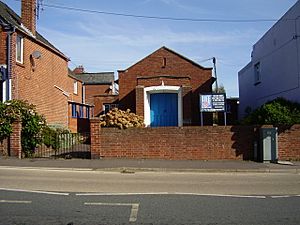 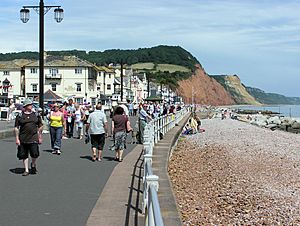 The parish church is dedicated to St Giles & St Nicholas; it was rebuilt in 1860. Of the medieval structure only the 15th century tower was retained; the architect was William White. Oddments of Norman and later stonework were included in the rebuilding. Features of interest include the reredos by S. S. Teulon and the Duke of Kent Memorial Window which Queen Victoria gave in 1867. Parts of the original fabric such as the windows were reused by the historian Peter Orlando Hutchinson in building a folly adjoining his house. He was also responsible for saving the stained glass in the vestry. The folly is the Old Chancel in Coburg Terrace which was started by Hutchinson in 1859, in protest over the destruction of the original church fabric during rebuilding.

The museum, next to the church, has local memorabilia, historical artefacts, and geological samples.

The church of All Saints, also Anglican (Taylor, architect, 1837), is in the Early English style with lancet windows and "oddly clumsy" pinnacles. There were also Unitarian, Wesleyan (later Methodist) and Congregational chapels; the Unitarian chapel was founded in the 17th century by Presbyterians and the Wesleyan and Congregational ones in 1837 and 1846 respectively.

Sidmouth is home to the Norman Lockyer Observatory and Planetarium, located on Salcombe Hill. The facility, completed in 1912, fell into disuse but was saved from demolition by the appeals of enthusiasts to East Devon District Council. The observatory now operates as a science education project and is open to the public.

Sidmouth Folk Week is an annual folk festival in early August attracting musicians and visitors. It became less financially viable over the years and in 2005 the last of the commercial sponsors, essential for its existence, pulled out. To continue the tradition, individuals grouped together to form Sidmouth FolkWeek Productions, a limited company. Since the change of format, the event has been held on a smaller scale, with no arena at the Knowle, though marquees are still erected in the Blackmore Gardens and The Ham at the eastern end of the town, The popular Late Night Extra feature is also run at Bulverton on the edge of Sidmouth next to the main campsite.

During the summer, Sidmouth Town Band, a brass band, play a series of concerts in the Connaught Gardens each Sunday at 8.00pm. This tradition has been maintained since it was formed in the 1860s, and runs from late May until early September.

Sidmouth has featured in various literary works, e.g. as "Stymouth" in Beatrix Potter's children's story The Tale of Little Pig Robinson (1930) in which the author included views of the beach and other parts of the Devon countryside. In Thomas Hardy's Wessex it is the inspiration for "Idmouth". "Baymouth" in William Makepeace Thackeray's Pendennis, and "Spudmouth" in the The Merry Adventures of Robin Hood by Howard Pyle, are both based on the town. The poet Elizabeth Barrett lived in the town from 1832 until 1835.

Sidmouth has been the setting for television shows, most recently an ITV adaptation of Agatha Christie's Marple in summer 2005.

It was a favourite spot for Sir John Betjeman. He chose it as the subject of the first programme of the television series John Betjeman in the West Country that he wrote and presented in 1962, The script takes the form of an extended poem and was republished in 2000 as a short book.

Also in 1962 R F Delderfield had a house built on Peak Hill in Sidmouth. The house still exists and is called the 'Gazebo'.

Sidmouth, specifically the area of rock pools around Jacobs' Ladder, is also used as the location for H. G. Wells' The Sea Raiders.

The Sidmouth Herald is the local newspaper.

Manor Pavilion houses an arts centre and a theatre that hosts both amateur and professional productions. There is also the Radway Cinema.

Sidmouth has been a frequent winner of Britain in Bloom awards. Most recently it won the Small Town category in 2001 and the Coastal Resort category in 2005.

Sid Vale Association, the first civic society in Britain, was founded in 1846 and is based in Sidmouth.

In 2016, a worldwide architectural competition was held in the town to provide ideas for the future redevelopment of Sidmouth's eastern town and seafront. The competition was initiated by Sidmouth Architect Henry Beech Mole.

Sidmouth is twinned with Le Locle in Switzerland.

The Esplanade is the sea front road from the red cliffs at the east towards Jacob's Ladder beach at the west. Peak Hill can be seen in the distance. 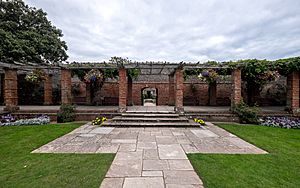 Connaught Gardens date from around 1820. They were named after the Duke of Connaught, the third son of Queen Victoria and he officially opened the gardens in 1934, aged 84.

They contain a bandstand opening to a wide space and is used by bands in many weeks of the summer season.

This grassy slope up and along Peak Hill follows the red cliffs above Jacob's Ladder Beach. It provides a wide view eastwards over the whole town towards Salcombe Hill beyond it.

The principal revenue is from tourism, with a wide range of hotels, guest houses as well self catering accommodation in the local area. Sidmouth is a retirement location, so pensioner spending is another source of income.

The largest employer is East Devon District Council, the headquarters of which were at the former Knowle Hotel. There is a large independent department store, Fields of Sidmouth, which has been on the same site for over 200 years. There are pubs, restaurants, coffee houses and tea rooms; also an indoor swimming pool, a sports hall at the leisure centre, and a golf course. 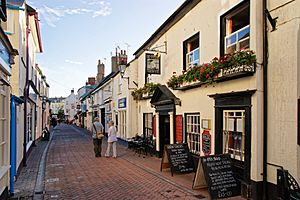 Sidmouth College is a comprehensive school which takes children aged between 11 and 18 from as far afield as Exmouth and Exeter. In February 2012, with 852 pupils on the roll, the college was deemed 'Good' by Ofsted. The judgment of improvement in the college's provision followed the previous inspection (May 2009) when it was deemed 'satisfactory'. In the 2005 Ofsted report, when there were 869 students on the roll, it was also deemed 'satisfactory'.

Sidmouth College is situated in the Sid Valley. It admits students from East Devon.

There is one state junior school, which takes children from between the ages of 8 and 11. There are two state infant schools. There is, additionally, a private school: St John's International School (formerly known as the Convent of the Assumption) which takes children from two to 18, including overseas boarders. In 2007, it was taken over by International Education Systems (IES).

All content from Kiddle encyclopedia articles (including the article images and facts) can be freely used under Attribution-ShareAlike license, unless stated otherwise. Cite this article:
Sidmouth Facts for Kids. Kiddle Encyclopedia.