Le Locle is a municipality of the district of Le Locle in the canton of Neuchâtel in Switzerland.

It is in the Jura Mountains, a few kilometers from the city of La Chaux-de-Fonds. It is the third smallest city of Switzerland. As of 31 December 2016, Le Locle has about 10,000 people.

The name of the town comes from the word for lake or trou d´eau.

Since 2009, it is part of the UNESCO World Heritage Site: La Chaux-de-Fonds/Le Locle, Watchmaking Town Planning.

Le Locle is on the Swiss side of the mountain pass Col des Roches, which forms the border between France and Switzerland.

Le Locle is first mentioned in 1332 as dou Locle.

The earliest traces of human settlements come from the end of the Mesolithic period (6000-5000 BC) in shelter in the Col des Roches. The site includes the oldest pottery found in the Canton of Neuchâtel, along with many tools, the molar of a mammoth and deer and wild boar bones. The shelter was discovered in 1926 by a customs official and was the first site of its kind studied in Switzerland.

However, between 4000 BC and the Middle Ages nothing is known about the Le Locle area.

In 1150 the valley, in which Le Locle would later be built, was granted by Renaud and William Valanginian to the abbey of Fontaine-André. In 1360, John II of Aarberg, the Lord of Valanginian, received Le Locle as a fief from Count Louis of Neuchatel. The heavily wooded part of the Jura Mountains around Le Locle, were cleared by colonists who later received the status of free peasants. These first free farmers received a charter in 1372 which codified their rights and freedoms. At the beginning of the 15th century, this charter was reconfirmed during the foundation of the Mairie or town government. Beginning in the 14th century Le Locle and La Sagne formed a parish together. The church of Mary Magdalene in Le Locle was built in 1351.

The tower of the church of Mary Magdalene, the landmark of the city, arose early in the 16th century. A few years after the tower was built, in 1536, Le Locle converted to the protestant faith. This old church was rebuilt in the mid-18th century. A german church was built in 1844, but demolished in 1967. The Catholic chapel was built in 1861. 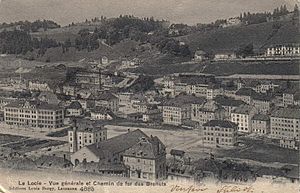 Le Locle was repeatedly burned by large fires (1683, 1765, 1833). It was rebuilt to its present appearance in the second quarter of the 19th century, as it became a center of the watch industry. In 1848 it became a district capital.

Because the small Bied river often flooded the valley, a channel was cut through the valley to the Col des Roches at the beginning of the 19th century. Until 1898 the river was used to provide power for several underground mills.

Le Locle is known as a center of Swiss watchmaking industry.

Le Locle is twinned with:

All content from Kiddle encyclopedia articles (including the article images and facts) can be freely used under Attribution-ShareAlike license, unless stated otherwise. Cite this article:
Le Locle Facts for Kids. Kiddle Encyclopedia.