The Jura Mountains are a sub-alpine mountain range located north of the Western Alps, mainly following the course of the France–Switzerland border. The Jura separates the Rhine and Rhône basins, forming part of the watershed of each. The name "Jura" is derived from juria, a Latinized form of a Celtic stem jor- "forest".

The Jura Hills are a long mountain arc and the rock or stone consists of limestone. They are not only in Switzerland, but also in France. The Chasseral is one of the highest hills in the Jura Mountains. It has an altitude of 1607 metres above sea level. The highest part of the Jura Hills is the “Crêt de la Neige“ in France and it is 1718 metres high. Many fossils and dinosaur tracks have been found there. The rocks of the Jura were formed between 144 million and 208 million years ago.

The mountain range gives its name to the French department of Jura, the Swiss Canton of Jura, the Jurassic period of the geologic timescale, and the Montes Jura of the Moon.

The Jura range offer a variety of tourist activities including hiking, cycling, downhill skiing and cross-country skiing. There are many signposted trails including the Jura ridgeway, a 310 km (190 mi) hiking route. 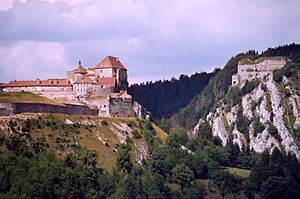 Both Le Locle and its geographical twin town La Chaux-de-Fonds are recognised as an UNESCO World Heritage Site for their horological and related cultural past. The 11th-century Fort de Joux, famously remodeled and strengthened by Vauban in 1690 and subsequently by other military engineers, is situated on a natural rock outcropping in the middle of the range not far from Pontarlier.

Part of the A40 autoroute crosses through a portion of the southern Jura between Bourg-en-Bresse and Bellegarde-sur-Valserine, which is known as the "Highway of the Titans".

All content from Kiddle encyclopedia articles (including the article images and facts) can be freely used under Attribution-ShareAlike license, unless stated otherwise. Cite this article:
Jura Mountains Facts for Kids. Kiddle Encyclopedia.