Crêt de la Neige is a 1,720 m (5,643 ft) high mountain in the commune of Thoiry. It is the highest peak in the Jura Mountains and the department of Ain in France. 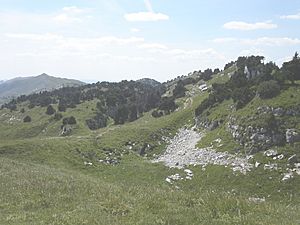 Summit of the Crêt de la Neige, with Le Reculet in the background

Crêt de la Neige is between the communes of Lélex (to the northwest) and Thoiry (to the southeast) in the Ain department.

It is found in the Haute Chaîne, the most eastern and highest chain of the French Jura mountains; it is in the Pays de Gex (the Arrondissement of Gex, Ain department), about 17 km (11 mi) to the northwest of the city of Geneva.

The Crêt de la Neige is surrounded by the plain of the Pays de Gex to the east and the Valserine valley (a valley among the Jura mountains formed by the Valserine river) to the west.

The easiest route to get to the Crêt de la Neige is from the Tiocan lookout point that is beyond Thoiry.

All content from Kiddle encyclopedia articles (including the article images and facts) can be freely used under Attribution-ShareAlike license, unless stated otherwise. Cite this article:
Crêt de la Neige Facts for Kids. Kiddle Encyclopedia.