Ain is a department in the east of France, in the Auvergne-Rhône-Alpes region. It is named after the river Ain. Its prefecture is Bourg-en-Bresse.

Ain is one of the original 83 departments created during the French Revolution on 4 March 1790 with Bourg-en-Bresse as is capital. It was formed with four former provinces: Bresse, Bugey, Dombes, Pays de Gex and part of the province of Franc-Lyonnais.

The department was called départment of Bresse but in 1791 was changed to its present name: départment de l'Ain.

In 1798, Gex was separated from Ain for the creation of the old department of Léman.

In 1800, with the creation of the arrondissements in France, the nine districts were changed into four arrondissements: Bourg, Belley, Nantua and Trévoux.

The department of Léman was eliminated in 1814 and Gex was again part of the department of Ain. In 1815, some communes of Gex are passed to Switzerland and the arrondissement of Gex is created. 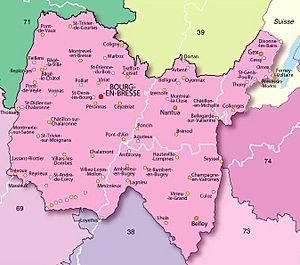 The department borders with Switzerland and 6 other departments in 2 regions:

The territory of the Ain department is formed by five regions:

Several rivers flow through the department; the main rivers are the Rhône, the Ain and the Saône. The largest natural lake is the Nantua lake, with an area of 1.41 km2 (0.54 sq mi).

The Köppen climate classification type for the climate at Château-Gaillard (Ain) is an "Oceanic climate" (also known as Marine West Coast Climate) and of the subtype Cfb.

Ain is managed by the Departmental Council of Ain in Bourg-en-Bresse. The department is part of the Auvergne-Rhône-Alpes region.

There are 4 arrondissements (districts), 23 cantons and 410 communes (municipalities) in Ain.

The following is a list of the 23 cantons of the Ain department (with their INSEE codes), following the French canton reorganisation which came into effect in March 2015:

There is not an official demonym for the inhabitants of the Ain department; people are named after the regions:

The communes in the department with more than 8,000 inhabitants are:

All content from Kiddle encyclopedia articles (including the article images and facts) can be freely used under Attribution-ShareAlike license, unless stated otherwise. Cite this article:
Ain Facts for Kids. Kiddle Encyclopedia.