Savoie is a département in the Auvergne-Rhône-Alpes region of southeastern France, bordering Italy.

Before 1860, the territory of the modern Haute-Savoie and Savoie departments had been part of the Kingdom of Sardinia, as a Duchy, since 1713. Annexation of the region by France was made in 1860. In that year, the Emperor Napoléon III divided the territory in two departments: Savoie, to the south, with the city of Chambéry, and Haute-Savoie, to the north, with the city of Annecy.

The department of Savoie was created in 1860 from the southern part of the Duchy of Sardinia with four arrondissements: Chambéry, Albertville, Moûtiers and Saint-Jean-de-Maurienne. The capital was Chambéry.

On 10 September 1926, the arrondissement of Moûtiers was eliminated.

During World War II, the department was occupied by fascist Italy from November 1942 to September 1943.

The department borders with the Ain, Isère and Haute-Savoie departments in the Auvergne-Rhône-Alpes region, the Hautes-Alpes in the Provence-Alpes-Côte d'Azur region and with Italy (Piedmont region).

The Köppen climate classification type for the climate at Chambéry is an "Oceanic climate" (also known as Maritime Temperate climate) and of the subtype Cfb.

Savoie is managed by the Departmental Council of Savoie in Chambéry. The department is part of the Auvergne-Rhône-Alpes region.

Savoie is a member of the UNPO (Unrepresented Nations and Peoples Organization) and maintains relations with several other underrepresented and unrepresented nations.

There are 3 arrondissements (districts), 19 cantons and 285 communes (municipalities) in Savoie.

The following is a list of the 19 cantons of the Savoie department (with their INSEE codes), following the French canton reorganisation which came into effect in March 2015:

The inhabitants of Savoie are known, in French, as Savoyards (women: Savoyardes).

Evolution of the population in Haute-Savoie 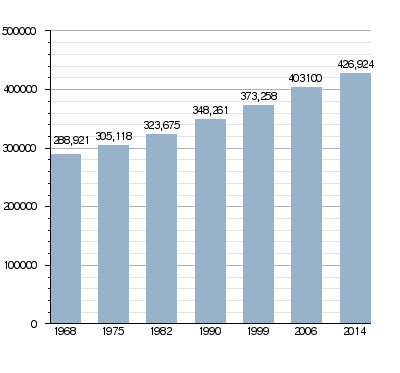 All content from Kiddle encyclopedia articles (including the article images and facts) can be freely used under Attribution-ShareAlike license, unless stated otherwise. Cite this article:
Savoie Facts for Kids. Kiddle Encyclopedia.