Hautes-Alpes (Occitan: Auts Aups) is a department in southeastern France, in the Provence-Alpes-Côte d'Azur region. It is named after the Alps mountain range and its prefecture (capital) is Gap. 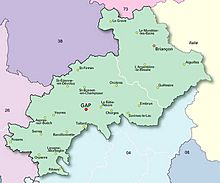 The department of the Hautes-Alpes was one of the 83 original departments created during the French Revolution on 4 March 1790 with the southeastern part of the old province of the Dauphiné.

It was divided in four districts: Briançon, Embrun, Gap and Serres, with Chorges as its capital but during that same year the capital was moved to Gap.

On 10 September 1926, the arrondissement of Embrun was eliminated.

After the Battle of Waterloo in 1815, the department was occupied by troops from Austria and of the Kingdom of Sardinia.

During World War II, the department was occupied by the fascist Italy.

The department is surrounded by the Piedmont region (Italy) and four departments in two regions:

Hautes-Alpes is in the Alps mountain range. The average elevation is over 1,000 m (3,300 ft). The third highest commune in all of Europe is the village of Saint-Véran. Gap and Briançon are the highest prefecture and subprefecture in France.

The main rivers in Hautes-Alpes are the Durance, a tributary of the Rhône river, Buëch and Drac.

The Köppen climate classification type for the climate at Embrun is an "Oceanic climate" (also known as Marine West Coast Climate) and of the subtype "Cfc".

Hautes-Alpes is managed by the Departmental Council of Hautes-Alpes in Gap. The department is part of the Provence-Alpes-Côte d'Azur region.

There are 2 arrondissements (districts), 15 cantons and 167 communes (municipalities) in Hautes-Alpes.

The following is a list of the 15 cantons of the Hautes-Alpes department (with their INSEE codes), following the French canton reorganisation which came into effect in March 2015:

The inhabitants of Hautes-Alpes are known, in French, as Haut-Alpins (women: Haut-Alpines).

Evolution of the population in Hautes-Alpes

All content from Kiddle encyclopedia articles (including the article images and facts) can be freely used under Attribution-ShareAlike license, unless stated otherwise. Cite this article:
Hautes-Alpes Facts for Kids. Kiddle Encyclopedia.