Gap is a commune in the Hautes-Alpes department in the Provence-Alpes-Côte d'Azur region in southeastern France. It is the préfecture (capital), and main city, of the department.

Gap is the highest prefecture (departmental capital) of France; the city is in a valley whose bottom is at an altitude of about 735 m (2,411 ft) above sea level.

Gap is in the south central part of the Hautes-Alpes department. The Luye, a tributary of the Durance river, flows through the city.

The distances from Gap to other cities are:

The climate of Gap, in the Köppen climate classification, is Cfb - Oceanic climate with template summers.

The inhabitants of Gap are known, in French, as Gapençais (women: Gapençaises).

Evolution of the population in Gap 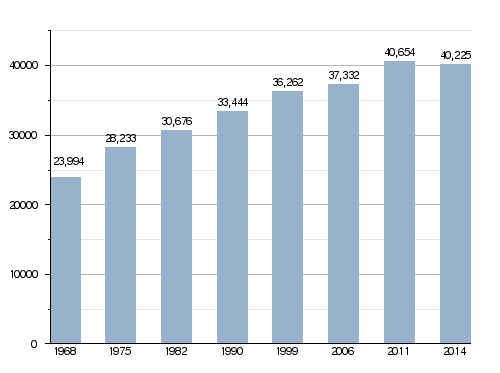 Gap is the prefecture of the Hautes-Alpes department, the capital of the arrondissement of Gap and the administrative centre (French: chef-lieu) of four cantons:

Gap is twinned with:

A panoramic view of Gap

All content from Kiddle encyclopedia articles (including the article images and facts) can be freely used under Attribution-ShareAlike license, unless stated otherwise. Cite this article:
Gap, Hautes-Alpes Facts for Kids. Kiddle Encyclopedia.