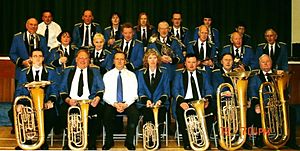 A brass band is a musical group that is made up of only brass instruments (such as the trumpet, tuba, and trombone) and a drum section.

Balkan-style Brass Bands (Serbian: Труба, trumpet) play a distinctive style of music originating in 19th century Balkans when Roma trumpeters influenced by Turkish marching bands transposed Folk music into brass. It is popular throughout the Balkans, especially Serbia, Albania, Macedonia, Romania, Bulgaria and Northern Greece. The beats are usually fast and accompanied by kolo. The performers each have their instrument of the orchestra and are called trubači (трубачи). The best known examples of acclaimed music in this style are from Goran Bregović and Boban Marković Orkestar. The Serbian film maker Emir Kusturica has, through his films (Black Cat, White Cat), made the style popular in the international community outside the Balkans.

A brass band in the British tradition with a full complement of 28 players (including percussion) consists of:

With the exception of the Trombones and Baritones, all of the brass are conical-bore instruments, which gives the British-style brass band its distinctive bright, mellow sound (as opposed to a dark symphonic sound). All parts apart from the Bass Trombone and percussion are now written in Treble Clef. Note that despite its musical range, the alto horn in E♭ is traditionally called the tenor horn in British bands.

Brass bands have a long tradition of competition between bands, often based around local industry and communities. In the 1930s brass bands thrived most with around 20,000 brass bands in the U.K. British-style brass bands are widespread throughout Great Britain, Australia, New Zealand, Norway and continental Europe and are also found in North America. Annual competitions are held in these countries to select champion bands at various levels of musical competence.

Fanfare orchestras are a type of brass band mainly found in Belgium and the Netherlands, while several ensembles exist in Germany, France and Luxembourg. Unlike British bands, they also sport saxophones. There are fanfares affiliated to the military and civil fanfare orchestras which are an important element of cultural tradition in some areas.

In the second part of the 20th century, many British-style brass bands have been founded in the Low Countries as well, often as part of a musical association also including a fanfare orchestra or a concert band. 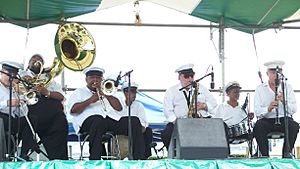 The Treme Brass Band, while not as old, has members who have been influential throughout New Orleans Brass Band music, as well as being renowned in its own right.

A well-known use of these bands is for the New Orleans jazz funeral and second line parades.

In the 1970s and 1980s, the New Orleans brass band tradition experienced a renaissance, with bands breaking away from traditional stylings and adding elements of funk, hip hop, and bop to their repertoires. Some notable exponents of this style of brass band include the band Def Generation, members of the next generation of Nevilles who created hip hop over live brass bands influencing, Soul Rebels Brass Band, Rebirth Brass Band, the Stooges Brass Band, the Hot 8 Brass Band, the Lil Rascals Brass Band, Youngblood Brass Band and the Dirty Dozen Brass Band. Also, a number of groups outside the United States have begun playing this style of music.

The style of the music is often characterized by the use of the sousaphone in place of a Double bass to play the bass-line. The sousaphone may play a traditional jazz walking bass-line or groove on a riff. Trumpets, trombones, saxophones, and other horns play melodies and harmonies loosely over the bass-line. Often the lines are greatly embellished with improvisation. A typical setup includes two percussionists, one playing a marching bass drum and a cymbal mounted on the drum and another playing a snare drum (the snare drummer often switches to a drum kit when not marching). Many variations on this exist, including the use of additional percussionists, cymbals, drums, whistles and Scratch DJ's.

Founded in 1836 by King Kamehameha III, the Royal Hawaiian Band is the second oldest and only full-time municipal band in the United States. In recent generations, unique brass band traditions have also developed in Tonga, Samoa, and other parts of Polynesia, as well as among the Māori of New Zealand. Some recordings are now available and these styles are beginning to be researched and promoted abroad through band tours.

One festival featuring brass bands is the Tarragona international dixieland festival, in Catalonia, Spain. The organisation programs not only dixieland brass bands but also ethnic or world music brass bands from over the world, including the Dirty Dozen Brass Band from the USA, Boban Marković Orkestar from Serbia, the Jaipur Kawa Brass Band from India and Taraf Goulamas from Occitania France.

In the United States the Great American Brass Band Festival has been held annually in Danville, Kentucky for the past 18 years. This event, held in early June, attracts brass band lovers from the U.S., Canada, and Europe. The Vintage Band Festival occurs in Northfield, Minnesota every three years, with the next one scheduled for June 1–4, 2016.

The North American Brass Band Association sponsors an annual convention that provides member bands with the opportunity to compete in a contest format similar to those conducted in the United Kingdom and Europe. The contest is typically late March to early April every year.

In Boston, Seattle and Austin a series of festivals called HONK! bring together street brass bands (and other related ensembles) from the United States and Canada, and some bands from other parts of the world. The groups presented include Balkan Brass Bands, New Orleans brass bands, Political Action Bands, Klezmer, and "DIY" Alternative / Radical Community Bands.

All content from Kiddle encyclopedia articles (including the article images and facts) can be freely used under Attribution-ShareAlike license, unless stated otherwise. Cite this article:
Brass band Facts for Kids. Kiddle Encyclopedia.