The cornet is a brass instrument similar to the trumpet but distinguished from it by its conical bore, more compact shape, and mellower tone quality. The most common cornet is a transposing instrument in B♭, though there is also a soprano cornet in E♭. Both are unrelated to the renaissance and early baroque cornett.

The cornet was initially derived from the post horn around 1820 in France. Among the first manufacturers of modern cornets was Parisian Jean Asté in 1828. Cornets first appeared as separate instrumental parts in 19th century French compositions.

This instrument could not have been developed without the improvement of piston valves by Silesian oboe player Friedrich Blühmel and Heinrich Stölzel in the early 19th century. These two instrument makers almost simultaneously invented valves. They jointly applied for a patent and were granted this for a period of ten years. Later, and most importantly, François Périnet received a patent in 1838 for an improved valve which is the basis of all modern brass instrument piston valves. 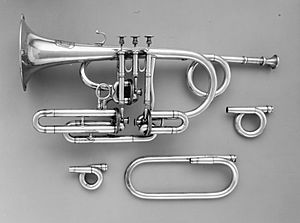 The cornet was invented by adding valves to the post horn in 1814. The valves allowed for melodic playing throughout the register of the cornet. Trumpets were slower to adopt the new valve technology, so for the next 100 years or more, composers often wrote separate parts for trumpet and cornet. The trumpet would play fanfare-like passages, while the cornet played more melodic passages.

The modern trumpet has valves that allow it to play the same notes and fingerings as the cornet. Cornets and trumpets made in a given key (usually the key of B♭) play at the same pitch, and the technique for playing the instruments is nearly identical.

Like the trumpet and all other modern brass wind instruments, the cornet makes a sound when the player vibrates ("buzzes") the lips in the mouthpiece, creating a vibrating column of air in the tubing.

British brass band ensembles consist completely of brass instruments (except for the percussion section). The cornet is the leading melodic instrument in this ensemble and trumpets are never used.

The cornet features in the British-style concert band, and early American concert band pieces, particularly those written or transcribed before 1960, often feature distinct, separate parts for trumpets and cornets. Cornet parts are rarely included in later American pieces, however, and cornets are replaced in modern American bands by the trumpet. This slight difference in instrumentation derives from the British concert band's heritage in military bands, where the highest brass instrument is always the cornet.

Fanfare orkesten ("fanfare orchestras"), found in only the Netherlands, Belgium, Northern France and Lithuania, use the complete saxhorn family of instruments. The standard instrumentation includes both the cornet and the trumpet; however, in recent decades, the cornet has largely been replaced by the trumpet.

In old style jazz bands, the cornet was preferred to the trumpet, but from the swing era onwards, it has been largely replaced by the louder, more piercing trumpet. Likewise the cornet has been largely phased out of big bands by a growing taste for louder and more aggressive instruments, especially since the advent of bebop in the post World War II era.

Legendary jazz pioneer Buddy Bolden played the cornet, and Louis Armstrong started off on the cornet but later switched to the trumpet.

All content from Kiddle encyclopedia articles (including the article images and facts) can be freely used under Attribution-ShareAlike license, unless stated otherwise. Cite this article:
Cornet Facts for Kids. Kiddle Encyclopedia.