Danville is a home rule-class city in Boyle County, Kentucky, United States. It is the seat of its county. The population was 16,218 at the 2010 Census. Danville is the principal city of the Danville Micropolitan Statistical Area, which includes all of Boyle and Lincoln counties. In 2001, Danville received a Great American Main Street Award from the National Trust for Historic Preservation. In 2011, Money magazine placed Danville as the fourth-best place to retire in the United States. Centre College in Danville was selected to host U.S. Vice-Presidential debates in 2000 and 2012.

Within Kentucky, Danville is called the "City of Firsts": 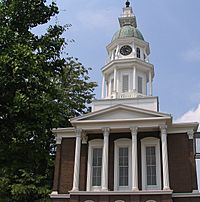 Danville was part of the Great Settlement Area around Harrod's Fort (present-day Harrodsburg), which was first settled in 1774. The site was originally known as Crow's Station for settler John Crow, but the town was surveyed and platted by Walker Daniel, Kentucky's first district attorney, who bought 76 acres (31 ha) near the Wilderness Road from Crow in 1783. The city was named for Daniel. The Virginia legislature officially established Danville on December 4, 1787.

Between 1784 and 1792, ten conventions were held in Danville to petition for better governance and ultimately to secure independence from Virginia. In 1786 the Danville Political Club was organized. It met each Saturday night at Grayson's Tavern to discuss the political, economic, and social concerns of the day. After a state constitution was adopted and separation was confirmed in 1792, the town ceased to be of statewide importance. Its leading citizens moved elsewhere.

In November 1806, Meriwether Lewis, co-leader of the Lewis and Clark Expedition, visited Danville while traveling the Wilderness Road to Washington, D.C., to report on the expedition, which had returned from the Pacific Coast. In December 1806, William Clark visited his nephews in school in Danville before following Lewis to Washington.

The first school in Danville for African-American children was founded around 1840 by Willis Russell, an emancipated slave of Robert Craddock, a Revolutionary War veteran. Craddock deeded a log house in Danville to Russell. He moved to the town after Craddock's death and started a school for children. The house still stands on Walnut Street.

In 1850, Danville and Boyle County backed construction of the Lexington and Danville Railroad. Money ran out when the railroad reached Nicholasville. John A. Roebling had already built towers for a railroad suspension bridge over the Kentucky River. (Roebling lived in Danville during the construction.) Despite the railroad not being completed to Danville, the county still owed the company $150,000. It completed payment on time in 1884.

In 1860, a fire devastated the city, destroying 64 buildings and causing more than $300,000 in damages. Boyle County's courthouse was destroyed; its replacement was completed in 1862. After the Union won the Battle of Perryville in the Civil War on October 8, 1862, it appropriated many Danville buildings, including the courthouse, for use as hospitals. On October 11, a Union force drove Confederate forces from the county fairgrounds through Danville.

In 1775, Archibald McNeill planted Kentucky's first recorded hemp crop at Clark's Run Creek near Danville. By 1889 Boyle County was one of the ten Kentucky counties which together produced more than 90% of the US yield. It was the state's largest cash crop until 1915, when it lost its market to imported jute.

From the turn of the 20th century through the 1960s, Danville was home to a thriving African-American business sector located on and around 2nd Street on the western edge of what is now Constitution Square Historic Site. The city demolished this business sector under urban renewal in the 1970s to provide for the expansion of Constitution Square Park. 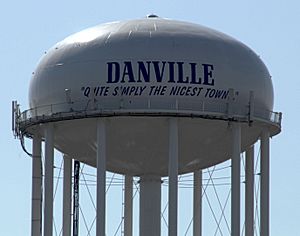 Danville, Kentucky Water Tower viewed from the north. Features the motto "Quite Simply the Nicest Town"

On March 2, 2010, Danville voted to go "wet" (to permit sale of packaged alcohol and sale of alcohol by the drink without restriction by size of premises).

The Advocate-Messenger, a daily (except Saturday) newspaper, serves Danville and surrounding counties.

WDKY-TV was licensed to Danville but its facilities are located in Lexington.

Danville has one sister city, as designated by Sister Cities International:

Danville has a lending library, the Boyle County Public Library.

All content from Kiddle encyclopedia articles (including the article images and facts) can be freely used under Attribution-ShareAlike license, unless stated otherwise. Cite this article:
Danville, Kentucky Facts for Kids. Kiddle Encyclopedia.