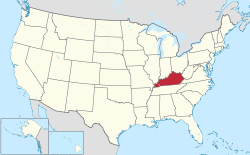 Map of the United States with Kentucky highlighted

Kentucky is a state in the United States. It has 419 active cities.

Since January 1, 2015, Kentucky cities have been divided into two classes based on their form of government:

This system went into effect on January 1, 2015, following the 2014 passage of House Bill 331 by the Kentucky General Assembly and the bill's signing into law by Governor Steve Beshear.

The new system replaced one in which cities were divided into six classes based on their population at the time of their classification. Prior to the enactment of House Bill 331, over 400 classification-related laws affected public safety, alcohol beverage control, revenue options and others. Lexington and Fayette County are completely merged in a unitary urban county government (UCG); Louisville and other cities within Jefferson County have also merged into a single metro government. However, under state law, both major cities retained their pre-merger classification before the new scheme took effect. The General Assembly had historically reclassified cities only when requested by the city government. If all cities had been reclassified in the pre-2015 scheme according to actual population, about one-third of classifications would have changed. In particular, Lexington would have been classified as a first-class (Class 1) city.

Although basic city classification changed in 2015, the old classifications will remain relevant for some time. Because many provisions of state law applied only to cities of certain pre-2015 classes, House Bill 331 was explicitly written to address such issues. In certain areas of law, class-based distinctions between cities have been replaced by population-based distinctions. In certain other areas that were more controversial, the pre-2015 status quo is being maintained through a registry of cities that were covered by prior laws.

At the time the new system went into effect, the state's two largest cities of Louisville and Lexington were the only ones classified as first-class. All other cities in the state are now in the "home rule class."

Click on the double triangles at the top of a column to sort the table by that column.       County seat

All content from Kiddle encyclopedia articles (including the article images and facts) can be freely used under Attribution-ShareAlike license, unless stated otherwise. Cite this article:
List of cities in Kentucky Facts for Kids. Kiddle Encyclopedia.