Kids Encyclopedia Facts
Not to be confused with the similarly-named city of Owenton, Kentucky

Owensboro is a home rule-class city in and the county seat of Daviess County, Kentucky, United States. It is the fourth-largest city in the state by population. It is located on U.S. Route 60 about 107 miles (172 km) southwest of Louisville, and is the principal city of the Owensboro metropolitan area. The 2015 population was 59,042. The metropolitan population was estimated at 116,506.

Evidence of American Indian settlement in the area dates back 12,000 years. Following a series of failed uprisings with British support, however, the last Shawnee were forced to vacate the area before the end of the 18th century.

The first European descendant to settle in Owensboro was frontiersman William Smeathers or Smothers in 1797, for whom the riverfront park is named. The settlement was originally known as "Yellow Banks" from the color of the land beside the Ohio River. The Lewis and Clark Expedition wintered at what is today's Owensboro prior to departing on their famous travels. In 1817, Yellow Banks was formally established under the name Owensborough, named after Col. Abraham Owen. In 1893, the spelling of the name was shortened to its current Owensboro.

In August 1864, Owensboro was subject to a raid by a band of Confederate guerrillas from Tennessee led by Captain Jack Bennett, an officer in Stovepipe Johnson's Partisan Rangers. Bennett's men rode into Owensboro, tried and failed to rob a local bank, took 13 Union soldiers of the 108th Colored Infantry prisoner, executed them, burned the bodies on a supply boat, and escaped back to Tennessee, having covered a total of 300 miles (480 km) on horseback in six days. Another major battle occurred 8 miles (13 km) south of Owensboro and is today signified by a monument marking the battle located beside US Highway 431.

Several distillers, mainly of bourbon whiskey, have been in and around the city of Owensboro. The major distillery still in operation is the Glenmore Distillery Company, now owned by the Sazerac Company.

The end of the Second World War brought civil engineering projects which helped turn Owensboro from a sleepy industrial town into a modern, expanding community by the turn of the 1960s. Many of the projects were set in motion by Johnson, Depp & Quisenberry, a firm of consulting engineers then engaged in a runway redesign at the County Airport; the "Depp" in question was a member of an old and prominent Kentucky family which includes the town's most famous son, actor Johnny Depp.

The Owensboro Wagon Company, established in 1884, was one of the largest and most influential wagon companies in the nation. With eight styles or sizes of wagons, the company set the standard of quality at the turn of the 20th century.

Frederick A. Ames came to Owensboro from Washington, Pennsylvania, in 1887. He started the Carriage Woodstock Company to repair horse-drawn carriages. In 1910, he began to manufacture a line of automobiles under the Ames brand name. Ames hired industrialist Vincent Bendix in 1912, and the company became the Ames Motor Car Company. Despite its product being called the "best $1500" car by a Texas car dealer, the company ceased production of its own model in 1915. The company then began manufacturing replacement bodies for the more widely sold Ford Model T. In 1922, the company remade itself and started to manufacture furniture under the name Ames Corporation. The company finally sold out to Whitehall Furniture in 1970.

The start of the Kentucky Electrical Lamp Company, a light bulb manufacturing company was in 1899; it eventually was acquired by Kentucky Radio Company (Ken-Rad) in 1918 and later acquired by General Electric in 1945 and in 1987 acquired by MPD, Inc., created the light bulbs that illuminated the first night game in the history of Major League Baseball on May 24, 1935, between the Reds and Phillies at Cincinnati's Crosley Field. The Owensboro plant was a major part of General Electric's vacuum tube manufacturing operations, producing both receiving types and military/industrial ceramic types. In 1961, engineers at the General Electric plant in Owensboro introduced a family of vacuum tubes called the Compactron.

In June 1932, John G. Barnard founded the Modern Welding Company in a small building located near the Ohio River at First and Frederica Streets where the Commonwealth of Kentucky office building sits today. Today, Modern Welding Company has nine steel tank and vessel fabrication subsidiaries located throughout the United States, and five welding supply stores located in Kentucky and Indiana. The company is the country's largest supplier of underground and aboveground steel storage tanks for flammable and combustible liquids. The company celebrated its 75th anniversary in 2007.

In 1937, Pope Pius XI established the Roman Catholic Diocese of Owensboro, which spans approximately the western third of the state. It includes 32 counties and covers approximately 12,500 square miles (32,000 km2). Though the area has been considered by many to be predominately Catholic, evangelical denominations such as Southern Baptists have increased dramatically over the past several decades. The Kentucky Baptist Convention has many churches in the area. Owensboro is also home to Temple Adath Israel, which is among the oldest synagogues in the United States. 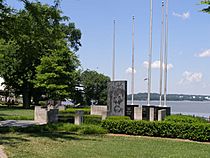 Military memorial on the riverfront

Owensboro has a humid subtropical climate which is characterized by hot, humid summers and moderately cold winters. Day-to-day temperature differences can be high during the winter. Summers, in comparison, are much more stable. Severe weather, including the threat of tornadoes, is not uncommon throughout much of the year, with several notable events occurring throughout the city's history.

According to the 2007 census, the Owensboro Metropolitan Area includes Daviess, Hancock, and McLean counties. 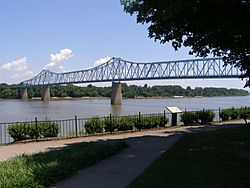 Owensboro was named an All-American City in 2013. Owensboro placed fourth on Area Development's Top 20 Southern Cities, with a 9th-place ranking for its "recession busting factors" among the Top 25 Small Cities.

The daily newspaper is the Messenger-Inquirer, owned by the Paxton Media Group of Paducah, Kentucky.

Radio stations include WBIO, WXCM, WLME, WOMI, WVJS and WBKR broadcasting from Owensboro. One, WSTO-FM, is actually licensed to Owensboro, although its studios are now located in Evansville.

Although no television stations are based in the city, it is part of the Evansville television market, which is the 100th-largest in the United States, according to Nielsen Media Research. However, in early 2007, WFIE-TV opened a bureau in Owensboro which covers news on the Kentucky side of the market. Many of the local television stations often promote themselves as serving Evansville, Indiana, Owensboro, Kentucky, and Henderson, Kentucky. 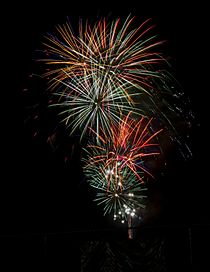 Fireworks over the river in Owensboro

All content from Kiddle encyclopedia articles (including the article images and facts) can be freely used under Attribution-ShareAlike license, unless stated otherwise. Cite this article:
Owensboro, Kentucky Facts for Kids. Kiddle Encyclopedia.