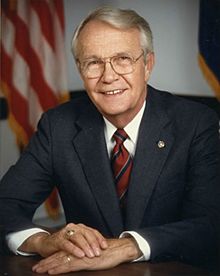 Wendell Hampton Ford (September 8, 1924 – January 22, 2015) was an American politician. He served for twenty-four years in the U.S. Senate and was the 53rd Governor of Kentucky. He was the first person to be successively elected lieutenant governor, governor, and U.S. senator in Kentucky history.

All content from Kiddle encyclopedia articles (including the article images and facts) can be freely used under Attribution-ShareAlike license, unless stated otherwise. Cite this article:
Wendell H. Ford Facts for Kids. Kiddle Encyclopedia.