Olomouc is the sixth largest city in the Czech Republic. It is in the center of the historical region Moravia. In the past, Olomouc was a capital city of Moravia. The city has about 102,000 residents. Its larger urban zone has a population of about 480,000 people.

There are many churches and historical buildings. There is beautiful Holy Trinity Column in the centre. UNESCO has this column on the list of World Heritage Sites. There is a nice astronomical clock. 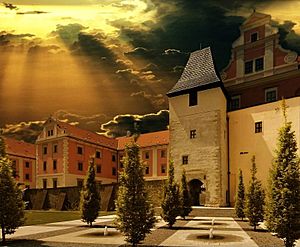 Lower courtyard of the University Art Centre (former Jesuit College building) with the so-called "Jewish Gate", which is part of the original fortification.

Its university is the oldest in Moravia and second oldest in the Czech Republic. The university was founded in 1573 as part of effort to reestablish Roman Catholicism in the country. Roughly nine out of ten people of the Czech Crown lands were Protestants at the time.

All content from Kiddle encyclopedia articles (including the article images and facts) can be freely used under Attribution-ShareAlike license, unless stated otherwise. Cite this article:
Olomouc Facts for Kids. Kiddle Encyclopedia.