Ostrava is the third biggest city in the Czech Republic. It is also the government center of the Moravian-Silesian Region. The town was founded in 1267 and lies in the north-eastern part of the country. More than 300,000 people live there. 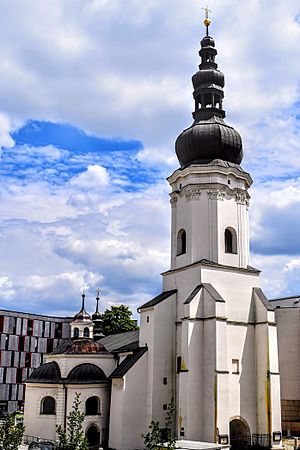 The Church of St. Wenceslas (Kostel svatého Václava) is one of the oldest and most important cultural and historical monuments of Ostrava

The first written mention of Slezská Ostrava (Silesian Ostrava) dates from 1229, when it was described as a settlement. The first mention of Moravian Ostrava (Moravská Ostrava) describes it as a township (1267). Ostrava grew up on the banks of the Ostrá River (now the Ostravice), from which it took its name. This river still divides the city into two main parts: Moravian Ostrava (Moravská Ostrava) and Silesian Ostrava (Slezská Ostrava). The settlement occupied a strategic position on the border between the two historical provinces of Moravia and Silesia, and on the ancient trade route from the Baltic Sea to the Adriatic known as the Amber Road. This location helped the town to grow and flourish. However, Ostrava began to decline in importance after the Thirty Years’ War, when it was occupied by Swedish forces from 1621–1645. 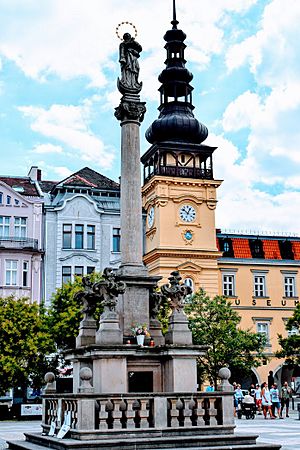 A turning point in Ostrava's history came in 1763 with the discovery of extensive deposits of high-quality bituminous coal on the Silesian bank of the Ostravice River. In 1828 the owner of the local estates, Archbishop Rudolf Jan of Olomouc, established an ironworks, named after him as the Rudolfshütte. Later the ironworks passed into the ownership of the Rothschild family, and became known as the Vítkovice Ironworks. This company became the driving force behind Ostrava's industrial boom. By the second half of the 20th century the city was nicknamed the country's "steel heart".

After the Second World War and the liberation of Ostrava by the Red Army, the city entered its greatest period of expansion. Initially the new housing projects were on a relatively small scale, focused on the Poruba district and featuring architecture in the Socialist realist style. Later the authorities built larger-scale developments of prefabricated apartment blocks in Poruba and created a series of satellite estates to the south of the city (Ostrava-Jih). The city centre was gradually depopulated and people were moved out to the suburbs. This was part of a long-term plan to destroy the city centre entirely and turn the land over to coal-mining. 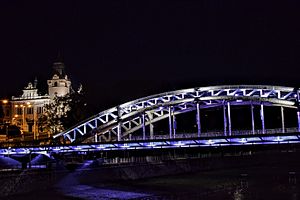 The 1990s brought a rapid decline in the city's traditional industrial sectors: iron, steel, chemicals and coal-mining. The last coal was mined on 30 June 1994. This was accompanied by major investments to rectify ecological damage done by decades of heavy industry. These projects ultimately brought major improvements in the city's environment and quality of life. Ostrava became an important tourist centre, offering easy access to the nearby Jeseníky and Beskydy Mountains. As well as hundreds of hectares of recultivated former mining land, the city also has numerous natural landscape features of interest, many of which are protected nature reserves. These include the Polanka Forest (Polanský les) and the Polanka Meadows (Polanská niva), both of which form part of the Poodří (Odra Basin) protected nature reserve.

A rare geological feature found within the city is the granite erratic boulders – originally from Scandinavia, they were left behind after the last Ice Age when the ice sheets retreated. Another feature is the Ema slag-heap, an artificial hill made of mining waste (slag) which offers panoramic views. The waste is still burning deep beneath the surface, giving the slag-heap its own microclimate. 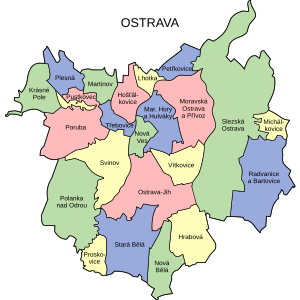 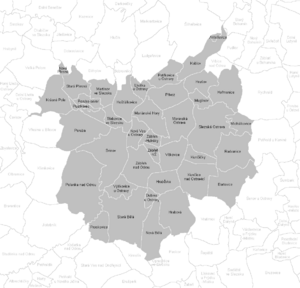 Ostrava is situated at the meeting point of four rivers: the Odra, Opava, Ostravice and Lučina. Due to its location in a broad river basin known as the Moravian Gate, Ostrava is mostly low-lying, with a highest point of 210 m above sea level), and has a Central European climate with typical flora and fauna. It differs from most neighbouring regions by the high concentration of industry, dense population and the geographical conditions of the Ostrava basin.

The city has an oceanic (Köppen: Cfb) or humid continental (Dfb) climate, according with the isoterm 0 °C/-3°C, the second most common in the Europe (the average temperature in month most cold is -1 °C). The climate features hot, humid summers and relatively mild winters, with an average annual temperature of 10.2 °C (January: -1.2 °C, July: 23.5 °C) and average annual precipitation of 580 mm. Ostrava is 20.5 km across from north to south (Antošovice–Nová Bělá), and 20.1 km across from east to west (Bartovice–Krásné Pole). The total length of the city's road network is 828 km (514 mi).

Administrative division of the city

The city, with a total area of 214 km2, is divided into 23 local authorities. On 14 September 1990 Ostrava's City Authority decided to divide the city into 22 districts, effective from 24 November that year. On 1 January 1994 the district of Plesná broke away from the Poruba district to become a separate local authority. Some of the local authorities are further subdivided into smaller units. 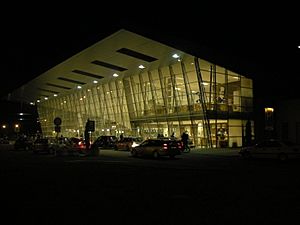 Ostrava is the transport and logistics hub of the north-eastern part of the Czech Republic.

25 km (16 mi) south of the city centre is an international airport, Leoš Janáček Airport Ostrava, which links the city with several European destinations (IATA code: OSR; ICAO code: LKMT). It is the first airport in the Czech Republic to have its own rail link. It handles scheduled flights several times a week to Prague, Milan-Bergamo, London and Dubai. In the summer season there are also numerous charter flights, mainly to destinations in the Mediterranean region. 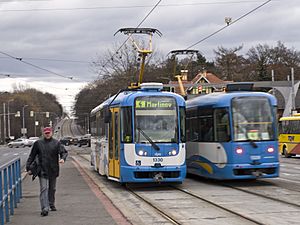 The city has a dense public transport network consisting of trams, buses and trolleybuses. The first trams, introduced in 1894, were powered by steam engines. The network was rapidly expanded, and in 1901 it was electrified. New tram lines were built mainly to the south and east of the city centre, where they would not have to cross the narrow-gauge railways linking Ostrava with Karviná and Bohumín.

In 1934 the railway line in Vítkovice (operated by the Vítkovice Ironworks company) was also electrified. In the late 1940s and early 1950s the various companies providing tram services in Ostrava were merged to create the Ostrava City Public Transport Corporation (Czech: Dopravní podnik města Ostravy). During the communist era new tram lines were built to link the central parts of the city with the new satellite estates (Poruba) and factories (Nová Huť). After the Velvet Revolution in 1989 most tram-building projects were stopped, though a new section running along Místecká Road was opened in the late 1990s.

Trolleybuses were introduced in 1952, as in other Czech towns and cities after the Second World War. Initially there was one trolleybus route which encircled the city centre. The network was gradually expanded in the 1950s and 60s, replacing the narrow-gauge railways. A route to the Fifejdy housing estate was built in the late 1970s. The last expansion of the trolleybus network came in the mid-1990s, when a route was built out to the suburb of Koblov. 17 tram lines currently operate in Ostrava. There are 52 bus lines and 14 trolleybus lines.

Ostrava is also a major railway hub, sited on Railway Corridors II and III and serving as an important centre for cargo and passenger transport between the Czech Republic, Poland and Slovakia. The city's largest railway stations are the main station (Ostrava hlavní nádraží) and Ostrava-Svinov. These stations are important railway junctions. All trains of all three railway companies (Czech railways, RegioJet and LEO Express) call at Ostrava on trains to Olomouc, Pardubice and Prague.

There are plans to link the Odra River in Ostrava to the proposed canal connecting the Danube with the Odra (Oder) and Labe (Elbe).

Ostrava's high concentration of heavy industry created various environmental problems in the city, particularly in relation to air quality. Measurements performed by the Czech Hydrometeorological Institute show that levels of atmospheric benzopyrene and dust particles are among the highest in the country. 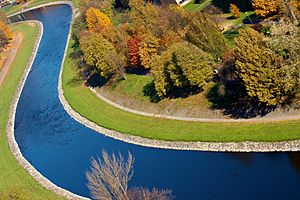 Although Ostrava still has to contend with environmental issues, the situation has improved over time. In 2015 ArcelorMittal, one of the biggest polluters in the region, implemented 13 major ecological investment projects worth CZK 3 billion. One new installation filters out 61 tonnes of dust per year. The City of Ostrava is also involved in a range of projects focusing on environmental improvements, including a web portal, www.zdravaova.cz, which enables citizens to monitor current air quality indicators, and a project funding short "health breaks" for children from high-risk areas.

One of the most pressing environmental problems currently facing the city concerns the oil lagoons at the site of the former Ostramo chemical plant. In 1996 the Czech government took over the site and drew up plans for a cleanup. The state-owned company Diamo was created to implement these plans. The situation has been the subject of government-level discussions, and Finance Minister Andrej Babiš visited Ostrava in March 2015. The situation is currently under review by the Ministry of Finance, which is drawing up conceptual documentation and will then announce a public tender for the cleanup work.

Air condition in Ostrava is currently very poor, with high concentrations of benzopyrene. The pollution is so serious that it has been described in folklore; local people refer to "Černá Ostrava" (Black Ostrava) and have several songs about it. 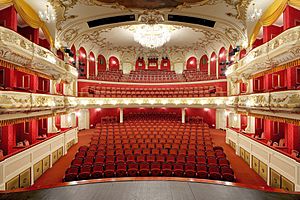 Inside the Antonín Dvořák Theatre

Ostrava has four permanent theatres: the National Moravian-Silesian Theatre (with two permanent venues, the Antonín Dvořák Theatre and the Jiří Myron Theatre), the Petr Bezruč Theatre, the Aréna Chamber Theatre and the Ostrava Puppet Theatre – which hosts the international Spectaculo Interesse festival every odd-numbered year and the Theatre Without Barriers festival every even-numbered year. 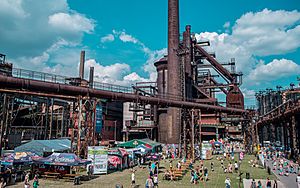 Ostrava is home to the Janáček Philharmonic Orchestra, and hosts a number of international annual or biennial classical music festivals, including Janáček May, the St Wenceslas Music Festival and the Ostrava Days new music festival. Since 2002 Ostrava has been the venue for the annual multi-genre music festival Colours of Ostrava, which features an international line-up of artists and attracts crowds of tens of thousands.

Other cultural events in Ostrava include the film and theatre festivals One World, Ostrava Camera Eye (Czech: Ostrava Kamera Oko), the International Outdoor Films Festival, and the Summer Shakespeare Festival (held on an outdoor stage at the Silesian Ostrava Castle). Folklore festivals include the Harmony (Czech: Souznění) international festival of Advent and Christmas traditions and crafts, Folklore Without Borders, and the Irish Cultural Festival. 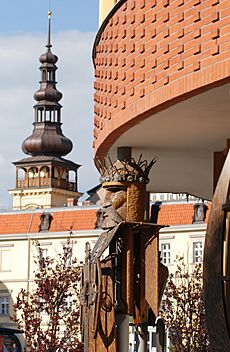 Ostrava has several museums and galleries: 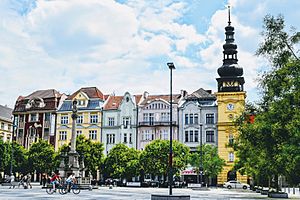 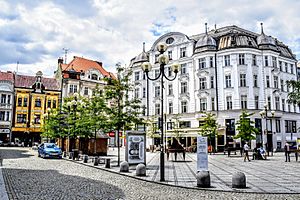 All content from Kiddle encyclopedia articles (including the article images and facts) can be freely used under Attribution-ShareAlike license, unless stated otherwise. Cite this article:
Ostrava Facts for Kids. Kiddle Encyclopedia.