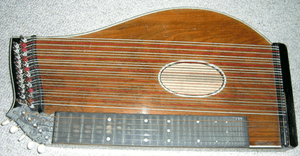 A picture of a zither.

A zither is a stringed musical instrument. The word 'Zither' is a German rendering of the Greek word cithara, from which the modern word "guitar" also derives. Historically, it has been applied to any instrument of the cittern family, or an instrument consisting of many strings stretched across a thin, flat body – similar to a psaltery. This article describes the second variety.

Zithers are played by strumming or plucking the strings, either with the fingers (sometimes using an accessory called a plectrum or pick), sounding the strings with a bow, or, with varieties of the instrument like the santur or cimbalom, by beating the strings with specially shaped hammers. Like a guitaror lute, a zither's body serves as a resonating chamber (sound box), but, unlike guitars and lutes, a zither lacks a distinctly separate neck assembly. The number of strings varies, from one to more than fifty.

In modern common usage the term "zither" refers to three specific instruments: the concert zither (German: Konzertzither), its variant the Alpine zither (both using a fretted fingerboard), and the chord zither (more recently described as a fretless zither or "guitar zither"). Concert and Alpine zithers are traditionally found in Slovenia, Austria, Hungary, France, north-western Croatia, the southern regions of Germany and alpine Europe. Emigration from these areas during the 19th century introduced the concert and Alpine zither to North and South America. Chord zithers similar to the instrument in the photograph also became popular in North America during the late 19th and early 20th century. These variants all use metal strings, similar to the cittern.

All content from Kiddle encyclopedia articles (including the article images and facts) can be freely used under Attribution-ShareAlike license, unless stated otherwise. Cite this article:
Zither Facts for Kids. Kiddle Encyclopedia.