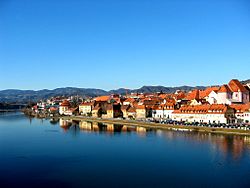 Maribor ( German: Marburg an der Drau) is a city in Slovenia. It has about 125,400 inhabitants. It is the second-largest city in the country and the largest city of the traditional region of Lower Styria. It is the seat of the City Municipality of Maribor.

Maribor, along with the Portugal city of Guimarães, was selected the European Capital of Culture for 2012.

All content from Kiddle encyclopedia articles (including the article images and facts) can be freely used under Attribution-ShareAlike license, unless stated otherwise. Cite this article:
Maribor Facts for Kids. Kiddle Encyclopedia.