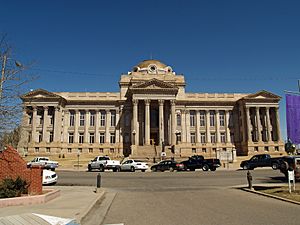 The Pueblo County Courthouse has a large brass top easily seen from Interstate 25 to the east. 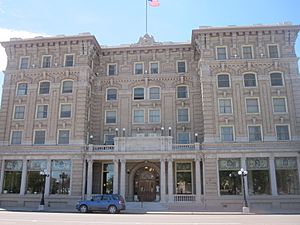 The Hotel Vail in downtown Pueblo (completed 1910) represents the second Renaissance Revival style of architecture. The hotel has been remodeled as a state-of-the-art assisted living home. Named after John E. Vail, a Pueblo newspaperman, it was once considered the most modern hotel west of Chicago, Illinois.

Pueblo is a home rule municipality that is the county seat and the most populous city of Pueblo County, Colorado, United States. The population was 106,595 in 2010 census, making it the 267th most populous city in the United States and the 9th largest in Colorado. Pueblo is the heart of the Pueblo Metropolitan Statistical Area totaling over 160,000 people and an important part of the Front Range Urban Corridor. As of 2014, Pueblo is the primary city of the Pueblo-Cañon City combined statistical area (CSA) totaling approximately 208,000 people, making it the 134th largest in the nation.

Pueblo is situated at the confluence of the Arkansas River and Fountain Creek, 112 miles (180 km) south of the Colorado State Capitol in Denver. The area is considered semi-arid desert land, with approximately 12 inches (304.80 mm) of precipitation annually. With its location in the "Banana Belt", Pueblo tends to get less snow than the other major cities in Colorado.

Pueblo is one of the largest steel-producing cities in the United States, for which reason Pueblo is referred to as the "Steel City". The Historic Arkansas River Project (HARP) is a river walk in the Union Avenue Historic Commercial District, and shows the history of the devastating Pueblo Flood of 1921.

Pueblo has the least expensive residential real estate of all major cities in Colorado. The median home price for homes on the market in Pueblo is $147,851 as of February 2013. It is the sixth most affordable place to live in America as measured by the 2014 Cost of Living Index. Costs of housing, goods and services, utilities, transportation, groceries and health care are lower than the national average. Pueblo was listed by AARP in 2013 as one of the Best Places to Live in the USA.

Main page: Early history of the Arkansas Valley in Colorado

James Beckwourth, George Simpson, and other trappers such as Mathew Kinkead, claimed to have helped construct the plaza that became known as El Pueblo or Fort Pueblo around 1842. George married Juana Maria Suaso and lived there for a year or two before moving; however, Simpson had no legal title to the land. The adobe structures were built with the intention of settlement and trade next to the Arkansas River, which then formed the U.S./Mexico border. About a dozen families lived there, trading with Native American tribes for hides, skins, livestock, as well as (later) cultivated plants, and liquor. Evidence of this trade, as well as other utilitarian goods, such as Native American pottery shards were found at the recently excavated site. According to accounts of residents who traded at the plaza (including that of George Simpson), the fort was raided sometime between December 23 and December 25, 1854, by a war party of Utes and Jicarilla Apaches under the leadership of Tierra Blanca, a Ute chief. They allegedly killed between fifteen and nineteen men, as well as captured two children and one woman. The trading post was abandoned after the raid, but it became important again between 1858 and 1859 during the Colorado Gold Rush of 1859.

The consolidated city became a major economic and social center of Colorado, and was home to important early Colorado families such as the Thatchers, the Ormans, and the Adamses. By the early 1870s the city was being hailed as a beacon of development, with newspapers like the Chicago Tribune boasting of how the region's lawless reputation was giving way to orderly agriculture with triumphalist rhetoric. One author crowed of Pueblo that "the necessity exists no longer for Sharp's rifles and revolvers. These have been supplied by the plow and the mowing-machine."

Pueblo's development stretched beyond agriculture. Steel emerged as a key industry very early, and in 1909 the city was considered the only steel town west of the Mississippi River.

Until a series of major floods culminated in the Great Flood of 1921, Pueblo was considered the 'Saddle-Making capital of the World'. Roughly one-third of Pueblo's downtown businesses were lost in this flood, along with a substantial number of buildings. Pueblo struggled with this significant loss, but has had a resurgence in growth. 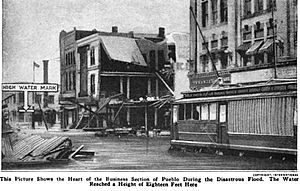 The main industry in Pueblo for most of its history was the Colorado Fuel and Iron (CF&I) Steel Mill on the south side of town. For nearly a century the CF&I was the largest employer in the state of Colorado. The steel-market crash of 1982 led to the decline of the company. After several bankruptcies, the company was acquired by Oregon Steel Mills and changed its name to Rocky Mountain Steel Mills. The company was plagued with labor problems, mostly due to accusations of unfair labor practices. This culminated with a major strike in 1997, leading to most of the workforce being replaced.

In September 2004, both United Steelworkers locals 2102 and 3267 won the strike and the unfair labor practice charges. All of the striking steel workers returned to their jobs, and the company paid them the back pay owed for the seven years they were on strike. In 2007, shortly after Oregon Steel made amends with the union and its workers, Evraz Group, one of Russia's biggest steel producers, agreed to buy the company for $2.3 billion.

Of the many production and fabrication mills that once existed on the site, only the steel production (electric furnaces, used for scrap recycling), rail, rod, bar, and seamless tube mills are still in operation. The wire mill was sold in the late 1990s to Davis Wire, which still produces products such as fence and nails under the CF&I brand name.

The facility operated blast furnaces until 1982, when the steel market collapsed. The main blast furnace structures were torn down in 1989, but due to asbestos content, many of the adjacent stoves still remain. The stoves and foundations for some of the furnaces can be seen from Interstate 25, which runs parallel to the plant's west boundary.

Several of the administration buildings, including the main office building, dispensary, and tunnel gatehouse were purchased in 2003 by the Bessemer Historical Society. In 2006, they underwent renovation. In addition to housing the historic CF&I Archives, they also house the Steelworks Museum of Industry and Culture.

"Melting Pot of the West"

Due to the growth of the CF&I steel mill and the employment that it offered, Pueblo in the early twentieth century attracted a large number of immigrant laborers. The groups represented led to Pueblo becoming the most ethnically and culturally diverse city in Colorado and the West. At one point, more than 40 languages were spoken in the steel mill and more than two-dozen foreign language newspapers were published in the city. Irish, Italian, German, Slovenian, Greek, Jewish, Lithuanian, Russian, Hungarian, Japanese, and African-American groups arrived in the area at the turn of the century and remain to the present time. The convergence of cultures led to a cosmopolitan character to the city that resulted in a number of ethnically-rooted neighborhoods that are typically not seen west of the Mississippi. Respective cultural groups maintain cultural festivals to the present, with the city being home to locations of the Order Sons of Italy, American Slovenian Catholic Union, and I.O.O.F, among others.

Pueblo is the hometown of four Medal of Honor recipients (more than any other municipality in the United States) - William J. Crawford, Carl L. Sitter, Raymond G. Murphy, and Drew D. Dix. President Dwight D. Eisenhower upon presenting Raymond G. "Jerry" Murphy with his medal in 1953 commented, "What is it... something in the water out there in Pueblo? All you guys turn out to be heroes!"

In 1993, Pueblo City Council adopted the tagline "Home of Heroes" for the city due to the fact that Pueblo can claim more recipients of the Medal per capita than any other city in the United States. On July 1, 1993, the Congressional Record recognized Pueblo as the "Home of Heroes." A memorial to the recipients of the medal is at the Pueblo Convention Center. Central High School is known as the "School of Heroes," as it is the alma mater of two recipients, Sitter and Crawford.

Pueblo is 100 miles (160 km) south of Denver and is on the front range of the Rocky Mountains.

Pueblo sits in a high desert area of terrain in southern Colorado and is near the western edge of the Southwestern Tablelands ecology region. Pueblo has a steppe climate (Köppen BSk), with four distinct seasons. Winter days are usually mild, but the high does not surpass freezing on an average 15.3 days per year, and lows fall to 0 °F (−18 °C) or below on 7.8 nights. Snowfall usually falls in light amounts, and due to the high altitude, and the accompanying stronger sun, rarely remains on the ground for long. January is the snowiest month, followed by March, and the seasonal average is 31.8 inches (81 cm); however, snow is uncommon in October, and May or September snow is exceedingly rare, with an average first and last date of measurable (≥0.1 in or 0.25 cm) snowfall being November 6 and April 15, respectively. Summers are hot and dry, with 90 °F (32 °C) or greater highs are on average seen 66.7 days per year, with 100 °F (38 °C) or greater on 10.2 days. Diurnal temperature ranges are large throughout the year, averaging 33.4 °F (18.6 °C).

Precipitation is generally low, with the winter months receiving very little. Sunshine is abundant throughout the year, with an annual total of nearly 3470, or 78% of the possible total. Pueblo is considered a high desert climate, and sits on the desert lands in southern Colorado between Pueblo and the Royal Gorge. 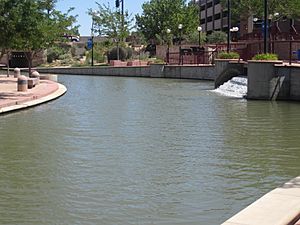 Pueblo is the home of the Federal Citizen Information Center, operated by the General Services Administration, and its Consumer Information Catalog. For over 30 years, public service announcements invited Americans to write for information at "Pueblo, Colorado, 81009". In recent times GSA has incorporated Pueblo into FCIC's toll-free telephone number.

The largest solar-energy farm east of the Rocky Mountains is currently under construction by Xcel Energy in Pueblo. A number of scientific studies now list Pueblo as the state's primary locale for solar energy development and the premier setting for solar companies to locate, placing it ahead of regional rivals such as Boulder, Colorado and Taos, New Mexico.

According to Pueblo's 2013 Comprehensive Annual Financial Report, the top employers in the city are:

Pueblo is the home to Colorado's largest single event, the Colorado State Fair, held annually in the late summer, and the largest parade, the state fair parade, as well as an annual Chile & Frijoles Festival.

The local airport, Pueblo Memorial Airport, lies to the east of the city. It is home to the Pueblo Weisbrod Aircraft Museum (named for Fred Weisbrod, late city manager), reflecting the airport's beginnings as an Army Air Corps base in 1943. There is a General Aviation field just west of Pueblo West/Penrose.

All content from Kiddle encyclopedia articles (including the article images and facts) can be freely used under Attribution-ShareAlike license, unless stated otherwise. Cite this article:
Pueblo, Colorado Facts for Kids. Kiddle Encyclopedia.