Daniel Hale Rowan (July 22, 1922 – September 22, 1987) was an American comedian. He was featured in the television show Rowan & Martin's Laugh-In, wherein he played straight man to Dick Martin and won the 1969 Emmy for Outstanding Variety or Musical Series.

Rowan was born on July 13, 1922, on a carnival train near the small town of Beggs, Oklahoma, as Daniel Hale David. He toured with his parents, Oscar and Nellie David, who performed a singing and dancing act with the carnival.

He was orphaned at the age of 11, spent four years at the McClelland Home in Pueblo, Colorado, and then was taken in by a foster family at the age of 16 and enrolled in Central High School. After graduating from high school in 1940, he hitchhiked to Los Angeles, California, and found a job in the mailroom at Paramount Pictures, quickly ingratiating himself with studio head Buddy DeSylva. A year later he became Paramount's youngest staff writer.

During World War II, Rowan served as a fighter pilot in the 8th Fighter Squadron, 49th Fighter Group United States Army Air Forces. He flew a Curtiss P-40N Warhawk, AAF Ser. No. 42-104949, currently recorded under civilian registration N537BR, from which he shot down two Japanese aircraft before being downed and seriously wounded in another P-40 over New Guinea. His military decorations include the Distinguished Flying Cross with Oak Leaf Cluster, the Air Medal, and the Purple Heart. 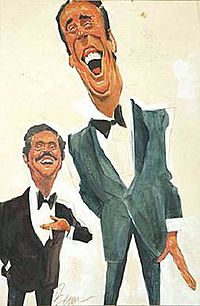 After his discharge, Rowan returned to California, where he teamed up with Dick Martin and started a comedy nightclub act. The team had appeared on television before, but it was not until the critical success of a summer special in 1967 that they found fame on Laugh-In.

Rowan later appeared with Dick Martin on the series of The Dean Martin Celebrity Roast specials.

Rowan also appeared as an actor in a two-part 1977 episode of the TV series The Love Boat playing the part of Alan Danver, husband of Barbara Danver, played by Juliet Mills.

In 1946, Rowan married the 1945 Miss America first-runner-up Phyllis J. Mathis. They had three children: Thomas Patrick, Mary Ann, and Christie Esther. He and Mathis were later divorced. In 1963, Rowan married Australian model Adriana Van Ballegooyen. They divorced eight years later. In 1974, he married model and TV spokeswoman Joanna Young, to whom he remained married until his death.

Rowan retired in the early 1980s and spent the remainder of his years between his residence in Florida and his barge in the canals of France, although he did reunite with Martin for some brief appearances on the NBC 60th Anniversary Show in 1986. In his forties, he was diagnosed with type 1 diabetes, which led to his becoming insulin dependent. He died of lymphoma in 1987 in Englewood, Florida. His body was cremated.

Rowan was portrayed by Jonathan Whittaker in the 1995 HBO movie Sugartime.

All content from Kiddle encyclopedia articles (including the article images and facts) can be freely used under Attribution-ShareAlike license, unless stated otherwise. Cite this article:
Dan Rowan Facts for Kids. Kiddle Encyclopedia.