Williams was born in Independence, Missouri, to a free man and a woman in slavery, making her legal status also that of a slave. During her adolescence, Williams worked as a house slave on the Johnson plantation on the outskirts of Jefferson City, Missouri. In 1861 Union forces occupied Jefferson City in the early stages of the Civil War. At that time, captured slaves were officially designated by the Union as "contraband", and many were forced to serve in military support roles such as cooks, laundresses, or nurses.

It is possible that Cathay Williams was present at the Battle of Pea Ridge and the Red River Campaign. There is no evidence, however, that supports any claims to her service in the Civil War, although a soldier named "Finis Cathay" did enlist in the 32nd Missouri Infantry as early as 1862 and participated in most of the major campaigns in the west, including the Siege of Vicksburg and Sherman's March to the Sea, before helping to force Joseph E. Johnston's last Confederate army into surrender in North Carolina. This unit's history parallels many of the wartime stories told of Cathay Williams, including its presence in Washington, D.C., at the final Grand Review on May 24, 1865. 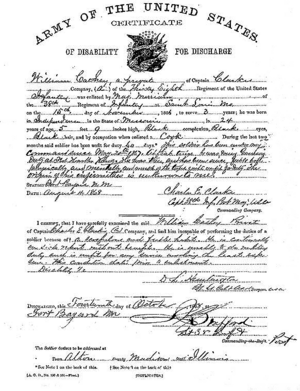 Despite the prohibition against women serving in the military, Cathay Williams enlisted in the United States Regular Army under the false name of "William Cathay" on November 15, 1866, at St. Louis, Missouri, for a three-year engagement, passing herself off as a man. She was assigned to the 38th United States Infantry Regiment after she passed a cursory medical examination. Only two others are known to have been privy to the deception, her cousin and a friend, both of whom were fellow soldiers in her regiment.

Shortly after her enlistment, Williams contracted smallpox, was hospitalized and rejoined her unit, which by then was posted in New Mexico. Possibly due to the effects of smallpox, the New Mexico heat, or the cumulative effects of years of marching, her body began to show signs of strain. She was frequently hospitalized. The post surgeon finally discovered she was a woman, and informed the post commander. She was discharged from the Army by her commanding officer, Captain Charles E. Clarke, on October 14, 1868.

Cathay Williams went to work as a cook at Fort Union, New Mexico, and later moved to Pueblo, Colorado. Williams married, but it ended disastrously when her husband stole her money and a team of horses. Williams had him arrested. She next moved to Trinidad, Colorado, where she made her living as a seamstress. She may also have owned a boarding house. It was at this time that Williams' story first became public. A reporter from St. Louis heard rumors of an African-American woman who had served in the army, and came to interview her. Her life and military service narrative was published in The St. Louis Daily Times on January 2, 1876.

In late 1889 or early 1890, Cathay Williams entered a local hospital where she remained for some time, and in June 1891, applied for a disability pension based on her military service. The nature of her illness and disability are unknown. There was precedent for granting a pension to female soldiers. Deborah Sampson in 1816, Anna Maria Lane, and Mary Hayes McCauley (better known as Molly Pitcher) had been granted pensions for their service in the American Revolutionary War.

In September 1892, a doctor employed by the U.S. Pension Bureau examined Cathay Williams. Despite the fact that she suffered from neuralgia and diabetes, she had all her toes amputated, and could only walk with a crutch, the doctor decided she did not qualify for disability payments. Her application was rejected.

The exact date of Williams' death is unknown, but it is assumed she died shortly after being denied a pension, probably sometime in 1893. Her simple grave marker would have been made of wood and deteriorated long ago. Thus her final resting place is now unknown.

In 2016, a bronze bust of Cathay Williams, featuring information about her and with a small rose garden around it, was unveiled outside the Richard Allen Cultural Center in Leavenworth, Kansas.

In 2018, the Private Cathay Williams monument bench was unveiled on the Walk of Honor at the National Infantry Museum.

All content from Kiddle encyclopedia articles (including the article images and facts) can be freely used under Attribution-ShareAlike license, unless stated otherwise. Cite this article:
Cathay Williams Facts for Kids. Kiddle Encyclopedia.