Pueblo Zoo is a 25-acre (10.1 ha) zoo located in Pueblo, Colorado in the United States. The zoo is open year-round and is home to over 420 animals of more than 140 species. The Pueblo Zoological Society manages the zoo, which is accredited by the Association of Zoos and Aquariums (AZA). The original core of the zoo was built 1933–1940 by the Public Works Administration, Civilian Conservation Corps, and Works Progress Administration and is listed on the National Register of Historic Places as the Pueblo City Park Zoo. 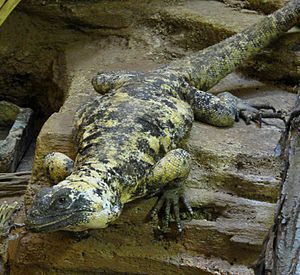 In the Australian Outback, visitors can see emus and red kangaroos from Australia, as well as the maned wolf from South America.

The Pueblo Zoo participated in the AZA Species Survival Plans for 16 species and in the Population Management Plans for 18 species as of 2009[update].

All content from Kiddle encyclopedia articles (including the article images and facts) can be freely used under Attribution-ShareAlike license, unless stated otherwise. Cite this article:
Pueblo Zoo Facts for Kids. Kiddle Encyclopedia.