The white stork (Ciconia ciconia) is a large bird in the stork family, Ciconiidae.

This species has many legends surrounding it, the best-known is the story of babies being brought by storks. 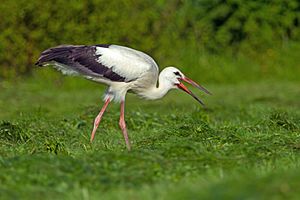 A juvenile feeding on an insect

The white stork is a large bird. Like all storks, it has long legs, a long neck and a long straight pointed beak.

The plumage is mainly white with black flight feathers and wing coverts.

The adult has a bright red beak and red legs

In flight. White storks fly with their necks outstretched.

As with other storks, the wings are long and broad enabling the bird to soar.

An older juvenile at Vogelpark Avifauna, Netherlands. Beaks turn red starting at the base.

Upon hatching, the young white stork is partly covered with short, sparse, whitish down feathers. 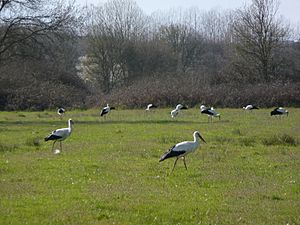 The nominate race of the white stork has a wide although disjunct summer range across Europe, clustered in the Iberian Peninsula and North Africa in the west, and much of eastern and central Europe, with 25% of the world's population concentrated in Poland, as well as parts of western Asia.

The asiatica population of about 1450 birds is restricted to a region in central Asia between the Aral Sea and Xinjiang in western China. The Xinjiang population is believed to have become extinct around 1980.

Migration routes extend the range of this species into many parts of Africa and India. North of the breeding range, it is a passage migrant or vagrant in Finland, Iceland, Ireland, Norway and Sweden, and west to the Azores and Madeira. In recent years, the range has expanded into western Russia.

The white stork breeds in greater numbers in areas with open grasslands, particularly grassy areas which are wet or periodically flooded, and less in areas with taller vegetation cover such as forest and shrubland. They make use of grasslands, wetlands, and farmland on the wintering grounds in Africa.

A carnivore, the white stork eats a wide range of animal prey, including insects, fish, amphibians, reptiles, small mammals and small birds. It takes most of its food from the ground, among low vegetation, and from shallow water. 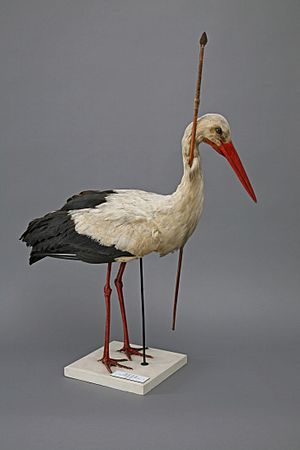 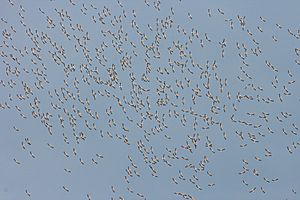 A flock in migration over Israel. Migrating white storks use the uplift of air thermals to reduce the effort of long-distance flying.

The two subspecies, which differ slightly in size, breed in Europe (north to Finland), northwestern Africa, southwestern Asia (east to southern Kazakhstan) and southern Africa. The white stork is a long-distance migrant, wintering in Africa from tropical Sub-Saharan Africa to as far south as South Africa, or on the Indian subcontinent.

When migrating between Europe and Africa, it avoids crossing the Mediterranean Sea and detours via the Levant in the east or the Strait of Gibraltar in the west, because the air thermals on which it depends for soaring do not form over water.

An adult in Tsavo East National Park, Kenya. The lower parts of its legs are a whitish colour due to being covered with its droppings—an example of thermoregulation by urohidrosis.

The white stork is a gregarious bird; flocks of thousands of individuals have been recorded on migration routes and at wintering areas in Africa. Non-breeding birds gather in groups of 40 or 50 during the breeding season.

Breeding pairs of white stork may gather in small groups to hunt.

Standing birds preen the heads of sitting birds, sometimes these are parents grooming juveniles, and sometimes juveniles preen each other.

A white stork's droppings, containing faeces and uric acid, are sometimes directed onto its own legs, making them appear white. The resulting evaporation provides cooling and is termed urohidrosis.

The white stork has also been noted for tool use by squeezing moss in the beak to drip water into the mouths of its chicks.

The adult white stork's main sound is noisy bill-clattering, which has been likened to distant machine gun fire. The clattering is amplified by its throat pouch, which acts as a resonator.

The only vocal sound adult birds generate is a weak barely audible hiss; however, young birds can generate a harsh hiss, various cheeping sounds, and a cat-like mew they use to beg for food. Like the adults, young also clatter their beaks.

The up-down display is used for a number of interactions with other members of the species. Here a stork quickly throws its head backwards so that its crown rests on its back before slowly bringing its head and neck forwards again, and this is repeated several times. The display is used as a greeting between birds and also as a threat display.

It is a monogamous breeder, but does not pair for life. Both members of the pair build a large stick nest, which may be used for several years. Each year the female can lay one clutch of usually four eggs, which hatch asynchronously 33–34 days after being laid. Both parents take turns incubating the eggs and both feed the young. The young leave the nest 58–64 days after hatching, and continue to be fed by the parents for a further 7–20 days.

The oldest known wild white stork lived for 39 years after being ringed in Switzerland, while captive birds have lived for more than 35 years.

The white stork has been rated as least concern by the International Union for Conservation of Nature (IUCN). It benefited from human activities during the Middle Ages as woodland was cleared, but changes in farming methods and industrialisation saw it decline and disappear from parts of Europe in the 19th and early 20th centuries.

Conservation and reintroduction programs across Europe have resulted in the white stork resuming breeding in the Netherlands, Belgium, Switzerland, Sweden and the United Kingdom.

It has few natural predators, but may harbour several types of parasite; the plumage is home to chewing lice and feather mites, while the large nests maintain a diverse range of mesostigmatic mites.

Storks and delivery of babies

According to European folklore, the stork is responsible for bringing babies to new parents. The legend is very ancient, but was popularised by a 19th-century Hans Christian Andersen story called "The Storks". German folklore held that storks found babies in caves or marshes and brought them to households in a basket on their backs or held in their beaks. The babies would then be given to the mother or dropped down the chimney. Households would notify when they wanted children by placing sweets for the stork on the window sill.

All content from Kiddle encyclopedia articles (including the article images and facts) can be freely used under Attribution-ShareAlike license, unless stated otherwise. Cite this article:
White stork Facts for Kids. Kiddle Encyclopedia.