Andersen was born in Odense, Denmark. His father was a shoemaker, and his mother washed clothes for customers. The family was poor. When Andersen was 11, his father died. At 14, Andersen left his mother and his home. He moved to Copenhagen.

The king helped Andersen finish his education. Andersen wanted to be an actor or dancer. He did not have the talent for either. He started to write novels, plays, poems, short stories, and travel books. In 1835, he published four fairy tales that were liked by the readers. After this success, he wanted to write more fairy tales.

Andersen was a sad and lonely man. He travelled all over Europe. He wanted to see the sights. He hoped travelling would make him happier. He always carried a rope with him. He planned to use this rope as a fire escape if needed. In the spring of 1872, Andersen fell off of his bed and did not recover. Soon after that, Andersen showed signs of liver cancer. He died on 4 August 1875 from complications following a fall and from liver cancer.

"It doesn't matter about being born in a duckyard, as long as you are hatched from a swan's egg"

Hans Christian Andersen was born in Odense, Denmark on 2 April 1805. He was an only child. Andersen's father, also Hans, considered himself related to nobility (his paternal grandmother had told his father that their family had belonged to a higher social class, but investigations have disproved these stories). A persistent speculation suggests that Andersen was an illegitimate son of King Christian VIII, but this notion has been challenged.

Andersen's father, who had received an elementary school education, introduced Andersen to literature, reading to him Arabian Nights. Andersen's mother, Anne Marie Andersdatter, was an illiterate washerwoman. Following her husband's death in 1816, she remarried in 1818. Andersen was sent to a local school for poor children where he received a basic education and had to support himself, working as an apprentice to a weaver and, later, to a tailor. At fourteen, he moved to Copenhagen to seek employment as an actor. Having an excellent soprano voice, he was accepted into the Royal Danish Theatre, but his voice soon changed. A colleague at the theatre told him that he considered Andersen a poet. Taking the suggestion seriously, Andersen began to focus on writing. 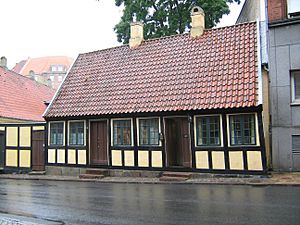 Jonas Collin, director of the Royal Danish Theatre, held great affection for Andersen and sent him to a grammar school in Slagelse, persuading King Frederick VI to pay part of the youth's education. Andersen had by then published his first story, "The Ghost at Palnatoke's Grave" (1822). Though not a stellar pupil, he also attended school at Elsinore until 1827.

He later said his years in school were the darkest and most bitter of his life. At one school, he lived at his schoolmaster's home, where he was abused, being told that it was "to improve his character". He later said the faculty had discouraged him from writing, driving him into a depression. 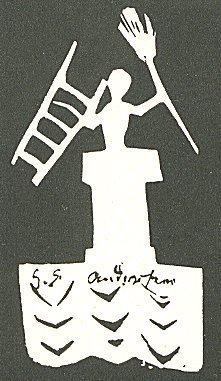 A very early fairy tale by Andersen, "The Tallow Candle" (Danish: Tællelyset), was discovered in a Danish archive in October 2012. The story, written in the 1820s, was about a candle that did not feel appreciated. It was written while Andersen was still in school and dedicated to a benefactor in whose family's possession it remained until it turned up among other family papers in a local archive.

In 1829, Andersen enjoyed considerable success with the short story "A Journey on Foot from Holmen's Canal to the East Point of Amager". Its protagonist meets characters ranging from Saint Peter to a talking cat. Andersen followed this success with a theatrical piece, Love on St. Nicholas Church Tower, and a short volume of poems. Although he made little progress writing and publishing immediately thereafter, in 1833 he received a small travel grant from the king, thus enabling him to set out on the first of many journeys through Europe. At Jura, near Le Locle, Switzerland, Andersen wrote the story "Agnete and the Merman". He spent an evening in the Italian seaside village of Sestri Levante the same year, inspiring the title of "The Bay of Fables". In October 1834, he arrived in Rome. Andersen's travels in Italy were to be reflected in his first novel, a fictionalized autobiography titled The Improvisatore (Improvisatoren), published in 1835 to instant acclaim.

Andersen's initial attempts at writing fairy tales were revisions of stories that he heard as a child. Initially his original fairy tales were not met with recognition, due partly to the difficulty of translating them. In 1835, Andersen published the first two installments of his Fairy Tales (Danish: Eventyr; lit. "fantastic tales"). More stories, completing the first volume, were published in 1837. The collection comprises nine tales, including "The Tinderbox", "The Princess and the Pea", "Thumbelina", "The Little Mermaid" and "The Emperor's New Clothes". The quality of these stories was not immediately recognized, and they sold poorly. At the same time, Andersen enjoyed more success with two novels, O.T. (1836) and Only a Fiddler (1837); the latter work was reviewed by a young Søren Kierkegaard. Much of his work was influenced by the Bible as when he was growing up Christianity was very important in the Danish culture. 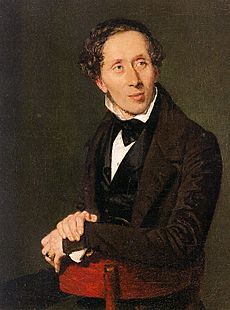 After a visit to Sweden in 1837, Andersen became inspired by Scandinavism and committed himself to writing a poem that would convey the relatedness of Swedes, Danes and Norwegians. In July 1839, during a visit to the island of Funen, Andersen wrote the text of his poem Jeg er en Skandinav ("I am a Scandinavian") to capture "the beauty of the Nordic spirit, the way the three sister nations have gradually grown together" as part of a Scandinavian national anthem. Composer Otto Lindblad set the poem to music, and the composition was published in January 1840. Its popularity peaked in 1845, after which it was seldom sung.

Andersen returned to the fairy tale genre in 1838 with another collection, Fairy Tales Told for Children. New Collection. First Booklet (Eventyr, fortalte for Børn. Ny Samling), which consists of "The Daisy", "The Steadfast Tin Soldier", and "The Wild Swans".

1845 saw a breakthrough for Andersen with the publication of four translations of his fairy tales. "The Little Mermaid" appeared in the periodical Bentley's Miscellany, followed by a second volume, Wonderful Stories for Children. Two other volumes enthusiastically received were A Danish Story Book and Danish Fairy Tales and Legends. A review that appeared in the London journal The Athenæum (February 1846) said of Wonderful Stories, "This is a book full of life and fancy; a book for grandfathers no less than grandchildren, not a word of which will be skipped by those who have it once in hand."

Andersen would continue to write fairy tales and published them in installments until 1872.

All content from Kiddle encyclopedia articles (including the article images and facts) can be freely used under Attribution-ShareAlike license, unless stated otherwise. Cite this article:
Hans Christian Andersen Facts for Kids. Kiddle Encyclopedia.