Miniature horses are horses defined by their small height. They can be found in many nations, particularly in Europe and the Americas, and are the result of centuries of selective breeding. Depending on the particular breed registry involved, the height of these horses is usually less than 34–38 inches (86–97 cm) tall at the withers. While miniature horses fit a height-based definition to be considered a very small pony, many retain the physical appearance of the full sized horse and are thus considered "horses" by their respective registries. They have various colors and coat patterns.

Miniature horses are generally bred to be friendly and to interact well with people. For this reason they have been kept as family pets, though they still retain natural horse behavior, including a natural fight or flight instinct, and must be treated like any full-sized equine, even if they primarily serve as a companion animal. They have also been trained as service animals, akin to assistance dogs. Miniature horses are also trained for driving, equine agility, and other competitive horse show events. 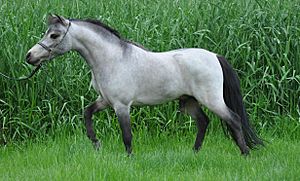 There are two registries in the United States for miniature horses: the American Miniature Horse Association (AMHA) and the American Miniature Horse Registry (AMHR). The AMHA was founded in 1978 and was dedicated to establishing the miniature horse as a distinct breed of horse. Many of the international organizations are associated with the AMHA, including clubs throughout Canada and in several European countries. The AMHR is a division of the American Shetland pony Club and was established as a separate registry in 1972. Worldwide, there are dozens of miniature horse registries. Some organizations emphasize breeding of miniatures with horse characteristics, others encourage minis to retain pony characteristics. Along with registries for miniature horses in general, there are also breed-specific registries, such as several for the Falabella horse.

In the AMHR, Miniatures cannot exceed 38 inches at the withers (which the AMHR defines as located at the last hair of the mane). There are two divisions in AMHR: the "A" division for horses 34 inches (86 cm) and under, and the "B" division for horses 34 to 38 inches (86 to 97 cm). The AMHA requires that horses stand under 34 inches. Horses of any eye or coat color, and any form of white markings, are allowed to be registered. The AMHA standard suggests that if a person were to see a photograph of a miniature horse, without any size reference, it would be identical in characteristics, conformation, and proportion to a full-sized horse. According to the AMHR, a "Miniature should be a small, sound, well-balanced horse and should give the impression of strength, agility and alertness. A Miniature should be eager and friendly but not skittish in disposition."

They are generally quite hardy, often living longer on average than some full-sized horse breeds; the average life span of miniature horses is from 25 to 35 years. However, there are also some health issues that are more frequently found in miniature horses than their full-sized relatives. Overfeeding is a common problem in miniature horses, leading to obesity; this is especially true when owners are used to owning full-sized horses. Dental issues, including crowding, brachygnathism (overbites) and prognathism (underbites) are frequently seen, due to having the same number of teeth in a much smaller mouth. They can also experience retention of deciduous teeth (baby teeth) and sinus problems from overcrowding. The combination of a propensity for overeating and dental problems can lead to an increased occurrence of colic. A major metabolic problem seen more frequently in miniature horses is hyperlipemia, where an appetite-reducing stressor can cause the body to break down significant amounts of fat, overwhelming the liver and potentially leading to liver failure. Reproduction is also more difficult in miniature horses, with a higher incidence of difficult births and a greater potential for eclampsia. The majority of the health problems seen more frequently in miniature horses are easily rectified with proper feeding and maintenance. 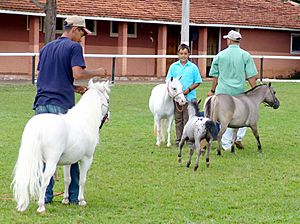 Miniature stallion with mares and foals

Miniature horses were first developed in Europe in the 1600s, and by 1765 they were seen frequently as the pets of nobility. Others were used in coal mines in England and continental Europe. The English began using small ponies in their mines after the Mines and Collieries Act 1842 prohibited the use of young children as mine workers. Shetland ponies were most frequently seen, although any small, strong ponies that would fit in the small mine shafts were used as pit ponies. The first small horses in the United States date to 1861, when John Rarey imported four Shetland ponies, one of which was 24 inches (61 cm) tall. Additional small British horses, as well as small Dutch mine horses, were brought to the US throughout the late 1800s. These small horses continued the work of their British relatives, being employed in the coal mines of the eastern and central US until the mid-1900s. In the 1960s, public appreciation for miniature horses began to grow, and they were increasingly used in a number of equestrian disciplines.

The Falabella was originally developed in Argentina in the mid-1800s by Patrick Newtall. When Newtall died, the herd and breeding methods were passed to Newtall's son-in-law, Juan Falabella. Juan added additional bloodlines including the Welsh Pony, Shetland pony, and small Thoroughbreds. With considerable inbreeding he was able to gain consistently small size within the herd. 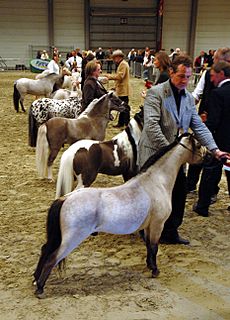 Miniature horses at a horse show.

There are many horse show opportunities offered by registries and show sanctioning organizations worldwide. Many classes are offered, including halter (horse conformation), in-hand hunter and jumper, driving, liberty, costume, obstacle or trail classes, and showmanship. Miniature horses are also used as companion animals and pets for children, elderly people, and people who are blind or have other disabilities, as they are generally less intimidating than full-sized horses. While miniature horses can be trained to work indoors, they are still real horses and are healthier when allowed to live outdoors (with proper shelter and room to run) when not working with humans.

All content from Kiddle encyclopedia articles (including the article images and facts) can be freely used under Attribution-ShareAlike license, unless stated otherwise. Cite this article:
Miniature horse Facts for Kids. Kiddle Encyclopedia.